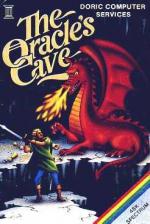 The Oracle's Cave could be a parable of what is wrong with humanity today. As you plod through the cave complex, you bump into a whole range of elaborate graphics characters, beautiful creations, and what do you do? You kill them...

You're a nasty piece of work. You've gone into the Oracle's Cave on a treasure hunt, and you can't leave until you've killed the Thing of your choice plus the Oracle itself, and collected a large store of treasure. Gambling debts? Saving up for an IBM PC? The instructions do not elaborate.

You have just five days - which works out at about an hour's play - to leave the place looking like a turkey factory.

The field of play is a vertical cross-sections of a series of caverns, on a number of levels, where you meet and generally kill the Giant Rat, Orge, Mummy or whatever before you can go anywhere but back the way you came. As you fight them, your strength and energy decrease which you build up again by eating and resting.

Commands are single key, presented in the form of a menu of single letter options. So, initially you opt to move, explore, rest or use an object, then if you opt to move, you'll be given the options left, right, up, down or secret passage.

Once you're locked into one of these menus, it's not possible to get out - you say move, you move. This explains the *h for help* function, which sends you straight back to the start.

Winning is about tooling up with axe and sword, and using the magic ring and the magic cloak to improve the odds.

In principle, an adventure where you hit things rather than solve puzzles makes a nice change, but this one may be too simple.