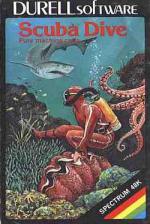 The standard of excellence of the loading graphics is maintained throughout the game.

You must dive to the sea bed and collect pearls first from oysters, then larger pearls from clams in underwater caverns, then look for treasure chests in the caverns beyond the caverns. My sole carp is the lack of a joystick option, though you can choose your own keys to control the diver's four movements: accelerate, decelerate, and rotate clockwise and anti-clockwise. You can also choose from four skill levels and say whether you want to load a previously saved high-score table.

You start on the back of a launch with three divers ready to go overboard. Pressing the accelerate key tumbles the first one over the side and into the water, and you move him down to the seabed to look out the oysters. He can collect a pearl only by touching an oyster when it's open, with the skill level affecting how long and how often they open. Touching the oyster is tricky as it's easy to either bump against the seabed and render yourself temporarily unconscious or get a little too close and allow the oyster fatally to snap shut on you.

A table at the side of the screen shows your depth, amount of oxygen left, a high score, and the number of points you are holding or have actually scored - they're not scored till you return your goodies to the boat, being careful to avoid the propellers.

On the seabed a giant octopus guards the cavern entrance where the claims are. You must speed past the waving tentacles, and then beyond this cavern another entrance is guarded by another octopus, this being where the treasure chest are. You earn an extra life if you get this far. At this stage there are oxygen cylinders around to save repeatedly returning to the surface.

As if all this wasn't enough, millions of colourful sea creatures teem around you, fatal to the touch. You hardly need reminding that sharks are not vegetarians. It's here the graphics really impress, with jaws opening and closing smoothly, and impressive 3D effects as the creatures lazily turn in the water. There are also squid, jellyfish, schools of small fish, and others you won't meet this side of a fishmonger's slab.

An excellent game showing the full potential of the Spectrum's graphics, and worth fishing out.

An excellent game showing the full potential of the Spectrum's graphics, and worth fishing out.