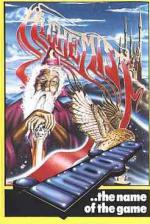 The Warlock's castle is a series of passages, part of which is shown on the screen above a block of information. You begin as the Alchemist and can move left and right, with the background scrolling as you approach the edge of the screen. A flick of the wrist or press of a key transforms you into an eagle, enabling you to fly over gaps and through passages off the top and bottom of the screen.

However you travel, you will see such objects as daggers, swords, shields, vases, rings and similar tempting items (including the odd trap) and it's up to you to discover what you're meant to do with them as you can carry only one item at a time. Trying to bar your way and generally do you mischief is a range of adversaries, such as ghosts, skulls and killer ants, not to mention killer tortoises and killer brollies.

Information at the foot of the screen shows your Spell Energy, Stamina and any spell or object you are carrying. An hour-glass indicates how long you can stay in a spot before discovery.

The graphics are colourful and impressive, but the most intriguing part of Alchemist is you're not quite sure what you're doing, so you experiment with moving objects from place to place, trying different spells: will the bucket see off the brolly, and so on.

While Alchemist is not breathtakingly original, it's up there with the bst of the recent releases.