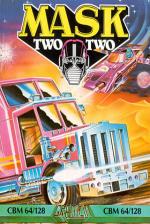 Yep, they're back again, in another game of the cartoon of the comic of the toy of the designer's money-spinning idea. And what an easy game it is. I have no objection to games that don't over-tax the mind, but MASK II is ridiculously simple. I managed to complete all the scenarios within ten minutes of working out how to control the vehicles.

Apart from being inanely easy MASK is also incredibly repetitive, with the same baddies appearing in each scene, and each scene featuring the same graphic style, and the same obstacles. And the different tasks to be accomplished? Simple: collect an object. Nothing more to it. Collect a ruby, collect a bomb, or collect a president.

The text must have been written by an MP because it did a good job of convincing me that I was loading a good game. When I thought it has loaded I select my scenario and the team members I wanted with me, I hit the Go icon, and what do I find? MASK II loads in two long boring bits, without a loading piccie.

VENOM have risen once again, this time with plans even more fiendish than their previous fiendish plans. The first of these is to capture the President of the P.N.A. I decided to rescue the President before I tackled any of the other missions. To keep things nice and even, I chose Matt Tracker and his gull-winged Thunder Hawk flying De Lorean, Dusty Hayes in his amphibious car called Gator, and Alex Sector in the almost unstoppable Rhino Juggernaut. Vroom, vroom and off we go. Oh dear, things are looking a bit like having to switch on the auto fire, what's that? Water? Better use Gator. A fifty foot cliff? No problem, just use Thunder Hawk. After two minutes of this I came to a 40 foot high effigy of Ronald Reagan, collected in and returned to the drop-off point. End of scenario. The same degree of ease goes for the laser gun and oil crisis stories. And each time you complete a mission there's no reward, no sound, no congratulations, no pretty end screen, nothing.

It really looks as if MASK's marketing managers couldn't care less about the quality of their product. Once a large number of people shell out their hard-earned, they'll be laughing. In this case, it's the under-tens who are going to be suckers.

It really looks as if MASK's marketing managers couldn't care less about the quality of their product. Once a large number of people shell out their hard-earned, they'll be laughing. In this case, it's the under-tens who are going to be suckers.