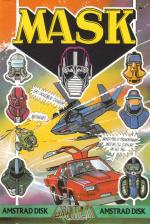 Ever had one of those days? You know the sort, when an evil organisation bent on world domination drops a vortex bomb on to your HQ and scatters all your friends throughout space and time. Some mornings it just doesn't pay to set. the alarm clock.

As Matt Trakker, master strategist of the forces of Mask, it's your job to pass through the vortex in your super vehicle Thunder Hawk and pick up all your lost buddies for a final assault on the Venom base. Sounds simple enough, but soon you discover the snags.

First, Venom have sent a pair of agents to each of four time zones (on the start level, one of these agents is yourself). Each agent has been separated from his "mask" (some sort of combat gear), and a sneak attack on Thunder Hawk at the start of the game has scattered the vehicle's equipment everywhere. That makes for a whole load of happy hunting.

Each of the Mask agents has been hidden in a doorway somewhere on the playing area. To locate an agent, you will need to find and switch on a personal scanner tuned to the agent: the direction finder on the Thunder Hawk dashboard then leads you to him.

But naturally it isn't quite that easy - to activate each scanner you must find and assemble (in the correct order) four parts of the corresponding security key (also lying around at random). When you manage to match four keys, they spell out a letter, which can be typed in on the keyboard to trigger the scanner, Now you can find your partner, and then go and pick up his mask (or your own on level 1).

The other items you can collect are Thunder Hawk's bombs, which are required to destroy obstacles blocking access to parts of the map, and repair kits, useful for patching up damage. Damage? Oh yes, I forgot to mention the tanks, jeeps, helicopters, falling boulders, acid pools, dinosaurs, laser turrets and a dozen other nasties that Venom unleashes upon you in the various time zones. A stroll through the countryside this ain't.

Each level is completed when you've found the scanner for the missing agent(s), chosen and assembled the correct set(s) of four security keys, located the agent(s) and reunited them with their mask. Then it's back to the vortex, where you are warped through to the next level.

On the fourth and final level you must complete the mission by totally destroying the Venom base. For this you have to hit it in certain selected areas with three of the Thunder Hawk bombs, Care is required when using your bombs: You automatically start the timer when you place them by the required target, and if you fail to get clear in time, Thunder Hawk goes up too!

Just in case this is all a little too easy for you, you're up against a time limit, too. Maybe today it should be someone else's turn to save the world...

This is the thinking woman's shoot-'em-up, if that isn't a contradiction in terms. Not just mindless mayhem and slaughter, though there's plenty of that, but map exploration, strategic thinking, memory puzzles and a steady hand required on the joystick.

The graphics are great, very colourful and with large, well-animated sprites. Unlike many Mode 0 games, you can really see what everything is supposed to be.

There's a nice loading screen too, but my one quibble is that neither the instruction leaflet or screen tell you Mask is a multi-load game, requiring a keypress at certain points to continue.

I don't believe it. A licensed game that is not awful! Let's hope Gremlin has started a trend. The graphics are excellent and varied, with lots of smooth animation. I found it very difficult at first (keyboard control is nearly impossible - use a joystick) but after a while I started to get the hang of things and this is definitely one I'm holding on to.

Two gripes though. First, the game crashes if you have external roms except the disc fitted (even if they're disabled). I object, to dismantling my hardware every time I play. Second, collision detection is a little too tight. Nevertheless - buy it.

Mask is a TV tie-in, which usually means the software house has spent a fortune on the licence and so does not have any money left to pay for the programming. Well perhaps Gremlin is a bit more far-sighted, or perhaps the Telly company was not as greedy as usual, but either way it works out that Mask is a good, exciting and well programmed game. Coming soon to a monitor near you Mask II. Shame the program is such rubbish.

The graphics are excellent and varied, with lots of smooth animation.