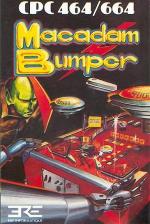 This is the first French import I have seen. It works on the 464 & 664 but not the 6128. This is a pinball table construction set. One strange feature of this cassette: it has the Amstrad version on one side and the Spectrum version on the other. This is going to confuse the shop assistants, isn't it?

The first thing you see on loading is a snazzy screen of a punk thumping a pinball table. If you don't get this, you are probably trying to load the Spectrum version (Twit!). The game is fairly long and takes a while to load, but when it is done you get a main menu (in English) and a snazzy little tune. When you get to the game, you notice that about one third of the screen is taken up by a sexist drawing. Now, I like sexist drawings, but not when they do nothing but take up one third of my playing area. Also, when you change ink colours, she looks awfully strange.

After you get tired of flipping the ball around the screen, you can design your own screen. The first bit I re-designed was the little chute off the side from which your balls can exit the field of play without scoring you any points - I plugged it! Misplaced bits can be rubbed out, and there is a limit to the number of flippers you can have. This is probably because the game slows down quite noticeably when you 'flip', and flickers more than usual.

Apart from these restrictions, you have to do all the debugging of the pinball table. It is quite possible to create traps for a ball which just continually clock up your score - high scoring alright, but as interesting as watching a cornflake go soggy. Fortunately, there's an 'I give up' key to get out of this kind of situation.

Unlike the last pinball game we reviewed, this one has a 'tilt' on it. Don't swirl the keyboard around - you'll only unplug it, there are special tilt keys on the keyboard. My only complaints are the size of the board and the lack of 6128 compatibility. As an extra incentive, PS'S are running a competition with a prize of a real pinball machine to the designer of the best screen.

This is a pinball table construction set and, apart from having a small board size, I don't really have any complaints.