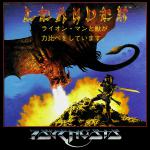 Leander | Relativity And Art Of Style | The Bottom Line

The avalanche of Psygnosis releases continues with an arcade platformer free of any original features whatsoever. So how, then is it that it's so darned playable? 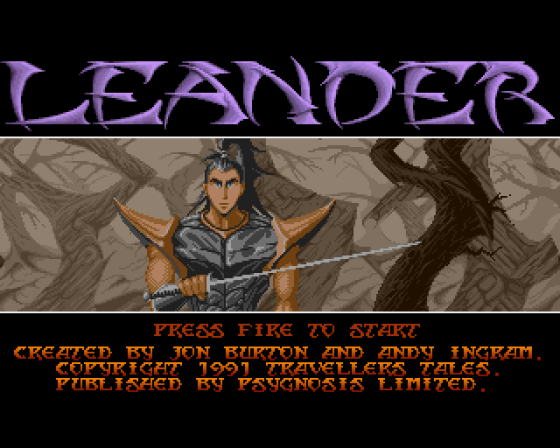 Greetings, my excellent friends. Welcome to our "Oh no! More Japanese-style Platform Games" slot. This month we're discussing Psygnosis' latest stab at bolting a game onto one of their crowd-pleasing parallax scrolling routines, Leander. Another meaningless title, more nice parallax, but - hey! what's this? - there's actually an excellent game lurking beneath the dreaded two layer scrolling! What's going on?

Actually, it's nothing too out of the ordinary. In style and execution Leander's not really a great deal different to the bulk of Psygnosis releases over the past twelve months. There is still a dearth of new ideas or originality here, but happily things simply hang together more happily than usual. Redeeming features abound - particularly in the areas of attention to detail and obviously player-orientated design (I know it sounds obvious, but you'd be surprised) - which carry Leander through.

If Leander has a cousin on the Amiga, then it has to be Switchblade 2, so that's where we'll stop for our first comparison. Both games give the first impression of being slick - but ultimately rather tired - efforts which sacrifice the fires of originality and enthusiasm for a sanitised Mega Drive-esque degree of professionalism. And yet, given enough time to prove themselves, both games actually manage to confound these impressions. 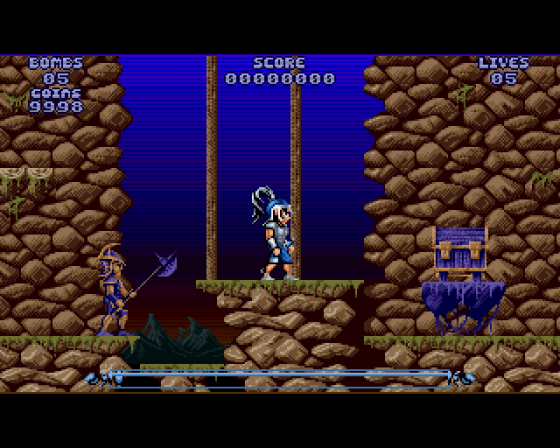 Reaching further afield in the Leander family tree, if Leander has a half-cousin once removed then it has to be Sonic The Hedgehog on the Sega Mega Drive. Although less obviously styled on Sega's spikey mascot than Robocod, say, it shares a number of visual reference points (the swinging platforms, butter-smooth movement, and that undefinable 'vibe' for want of a better word). This isn't a complaint at all - Sonic is a top game, and no mistake - and as it looks unlikely to ever grace the Amiga, I've got no problems with other games borrowing little elements here and there. If the professional sheen of Sonic inspires other programmers to emulate the glitch-free console style, it would be churlish to complain. Which brings me to the part of the review where I actually describe what the hell happens in the game. (To be honest, I could do this in one sentence - walk, jump, slice, collect, go to exit, go to next level - but I'd probably get sacked, so let's get a bit more detailed).

Controlling a cute little sprite - something like a medieval knight crossed with a Barbie doll, despite the Japanese styling of the packaging - the action takes place over several worlds, each with a number of levels. An intro screen precedes each level, with a cute babe giving some simple directions on how to complete the set tracks, and so advance to the next one. These are pretty simple affairs, usually along the lines of finding a crown or some such at one end of the play area, then making your danger-filled way to the glowing exit door at the other. Straightforward, huh?

Well, there are complications (just like in The Young Doctors). Finding the object in question isn't always quite so simple as it sounds - in addition to the fact that there are usually several dozen wooden chests lurking around (mm, I wonder which one the treasure is in?), the landscape is potted with caves, evil spikes, and the inevitable motley collection of sword-wielding nasties. Subsequent levels add tidbits like horse-drawn carts (jump on them as a useful way to reach higher ledges), airborne elves (with a sizeable collection of bombs) and - hey! - it wouldn't be a Psygnosis game without a shop. It's here that all the coins gleaned from chests and dead nasties can be used, equipping our hero with better armour, a better sword, throwing daggers, and several groovy magic items.

So far, so typical. So where does that leave us? Well, the proof of the pudding (as Stuart Campbell's granny used to say) is in the eating, and, boy, does Leander taste good. It may be lacking in original ideas, and the graphics may be styled just like every other Psygnosis scroller you've ever seen, but there's thought behind the layout of platforms, minor puzzles to solve, and caves to negotiate. Perhaps the secret of Leander's success lies in the unadulterated slickness of everything. Arcade (or at least console) quality in every aspect, it's the carefully developed little details which add up to a satisfying jump and slash adventure. The way, for instance, that the main sprite has a small amount of inertia which has to be taken into account when running and jumping (or negated by tapping the joystick); the ability to define the number of credits, lives and access codes for later worlds; the sheer rightness of it all - these are a few of my favourite things.

Against all odds, Leander has managed to win itself a place in my heart. Whatever its faults it offers a decent amount of top platform action.

Downers: Shallow as hell, and if there's a single feature in here which I haven't seen elsewhere, then (um) I must have blinked and missed it. And how I hate those in-game tunes! (At least they can be swapped for some middle-of-the-road sound fx if you really get sick of them).

Though ultimately a limited romp, Leander nevertheless manages to offer plenty of short term fun, and what it lacks in inspiration it makes up for in persperation. One of Psygnosis' finest recent moments, and an excellent game in its own right.

Leander | Relativity And Art Of Style | The Bottom Line

One of Psygnosis' finest recent moments... An excellent game. 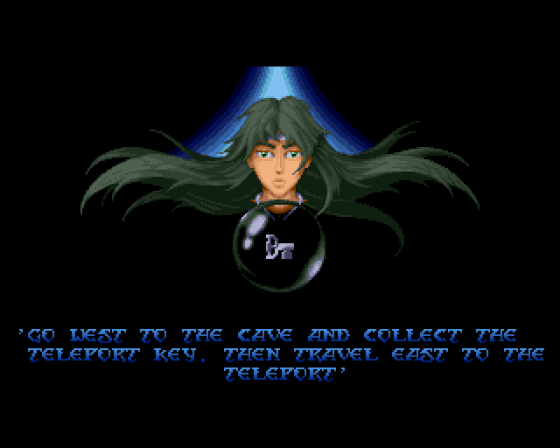 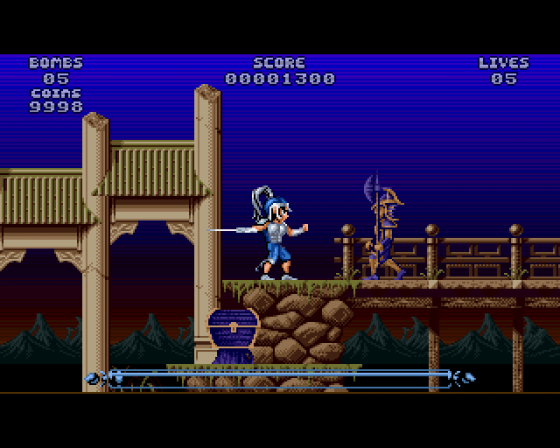 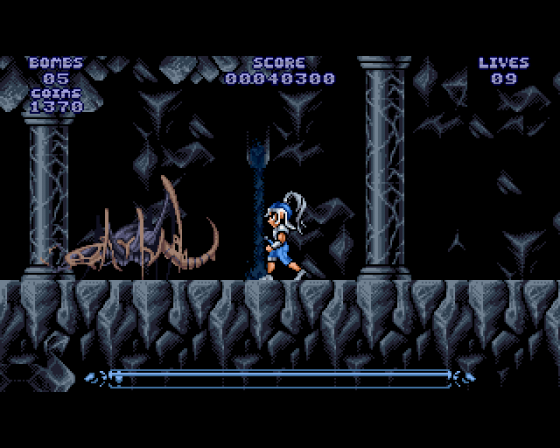 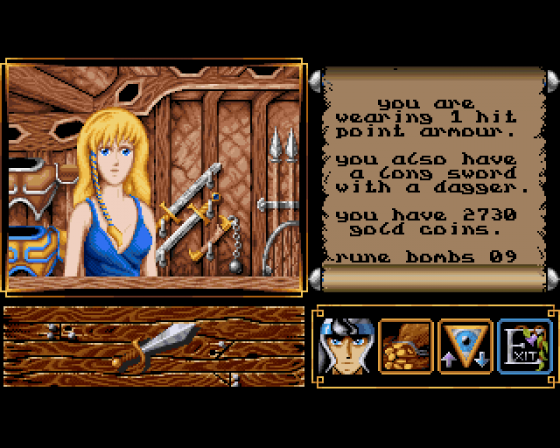 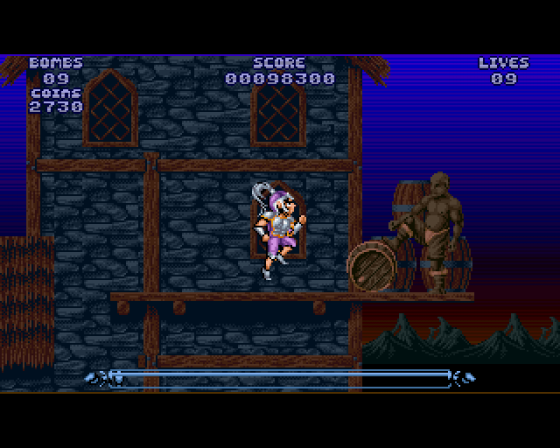 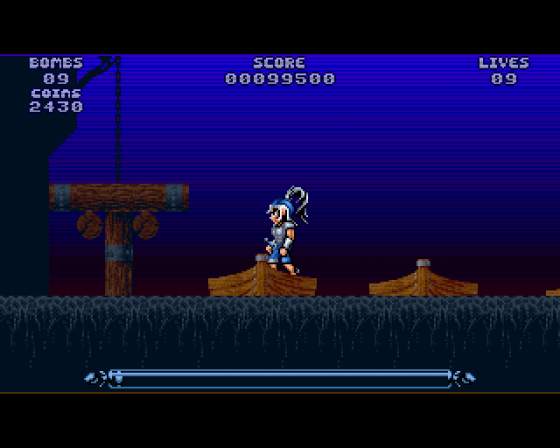 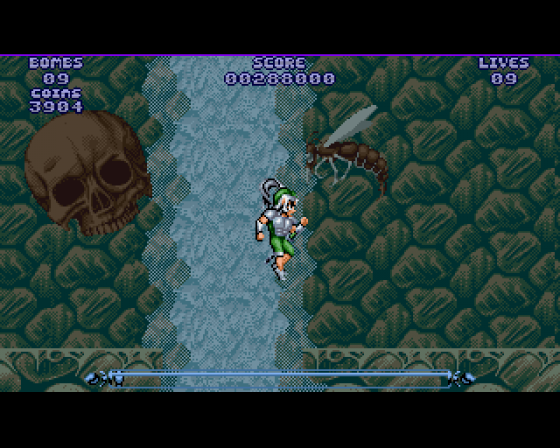 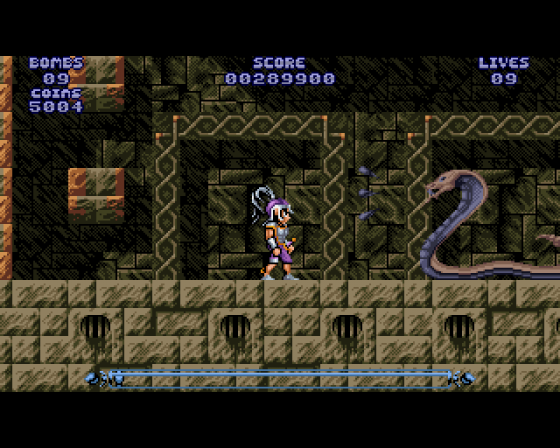