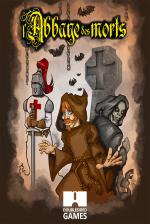 Games on the Commodore 64 always seem to offer that little bit "more" than their Spectrum and Amstrad stablemates. The C64 version of L'Abbaye Des Morts, a conversion of the Spectrum game of the same name, takes the 2014 Speccy title, and turns a platformer that was good into something truly gorgeous.

You're Jean Raymond, a monk whose face peeps out from his habit, and a member of the Cathars. The Cathars, who preached and practised living simply and without accumulating possessions, came under siege in the 13th Century when the Great Crusade swept through France. Indeed, L'Abbaye Des Morts opens with a bunch of Crusaders hot on Jean's heels. If you don't scurry him into a nearby abandoned abbey within the first few seconds or so, it'll be Game Over very quickly indeed.

Now there's no getting away from the fact that L'Abbaye Des Morts is a platform game, and there are probably over 5,000 platform games for the Commodore 64 alone. Nevertheless, it's a good one, with fair collision detection, great graphics, tons of atmosphere and a simple mission at its heart.

To win, all you have to do is collect the twelve Catharic crosses. There are a few switches which toggle gates and drawbridges, and a bell which releases the hinge on a trapdoor, but ultimately this is one of those games where you perch on platforms, sail over the heads of patrolling nasties and hope you get to see more of the game before your lives run out. Acid drips from the ceilings in some locations, doors transport you magically around the abbey if you push up in front of them and there's a particularly forboding dragon in one location too.

Despite the tired format, it's hard not to be seriously impressed by what's been done here. But why? After a bit of thought, I figured out that what makes L'Abbaye Des Morts so good is that it's varied in a way that most run-of-the-mill platformers aren't. The designer obviously decided to make a small(ish) game and to hide individual surprises in each room, rather than make a very big one with lots of repetition of the same nasties. The historical setting also helps to build atmosphere - the sanctuary of the church (abbey), the impressive stained glass windows, plus the copious amount of tombs and skulls all reinforce that eerie title.

And small it may be, but that doesn't certainly doesn't mean it's easy. So far I've managed to collect six of the crosses so I presume I've seen about half of the game. It takes a great degree of skill and patience, and it is sometimes frustrating to be picked off by an acid drop you didn't see, or when a carefully timed jump actually sends you flying into a foe you didn't reckon on.

I don't think there'll be many people who would disagree that this Commodore conversion is even better than the original. If you're after a game that'll test your mettle, but also that you'll have a good chance of completing once you learn the nasties' movement patterns, then look no further. Bring life to the abbey of death.