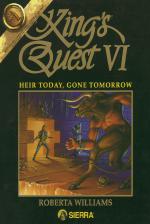 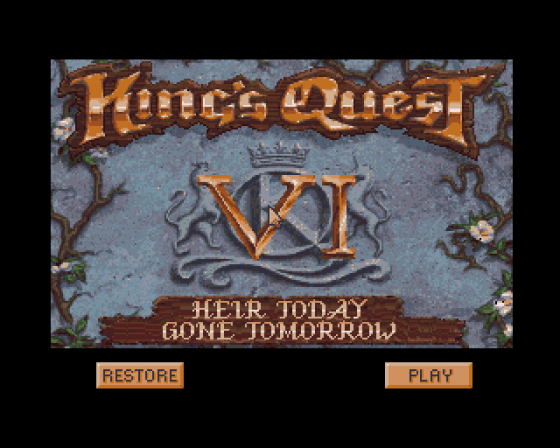 First there was King's Quest...

The chances are that most fans of the last King's Quest game, number five, will either by dead by now or too weakened by old age to operate their Amigas properly. It was reviewed in AP7 - that's an incredibly three years ago, almost - making King's Quest 6 one of the most, er, awaited sequels ever. As for King's Quest 4, well, heaven knows. It probably came out before the Amiga was even invented, and involved wooden cylinders with bits of card and mirrors stuck to them.

That being the case, it's perhaps surprising that the mechanics of King's Quest 6 - the user interface and so forth - are almost indistiguishable from King's Quest 5's. There's still that little bar of icons at the top of the screen, and you still cycle through the most frequently-used ones by pressing the right mouse button. Three years of progress has changed nothing. That's not necessarily a bad thing, as the system's fast and efficient, but it's been overtaken by more recent point-and-click adventures in terms of slickness, and it doesn't let you do much interacting with other characters. 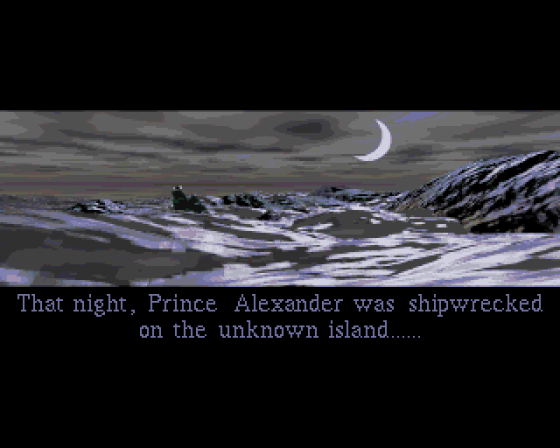 Rather more of a pity is that the storyline feels just as dreary and cliched as King's Quest 5's. It's filled with the same old princes and princesses and grand viziers, the same old shopkeepers and sailors and lamp-sellers, none of them with any discernible personality, and all of them spewing out screenfuls of dialogue that simply isn't worth reading.

But after the initial disappointment has faded, it's business as usual. King's Quest 6 (subtitled 'Heir Today Gone Tomorrow') is just as big and enjoyable a game as the last one. Bigger, in fact.

You're Prince Alexander (and not a king at all), and you've been shipwrecked on an island. And - oh no - Cassima, the princess you used to out with, seems to have become engaged to an evil vizier who won't let you anywhere near her, and who'll become ruler of the Green Isles if the wedding goes ahead. But where's he keeping her? Why doesn't she fancy you any more? How can you persuade the townspeople of your royal identity. Will Patch get out of the way of that car in time? And who is the mysterious Mr Small? Just some of the questions you must find answers to. (And some you mustn't.) 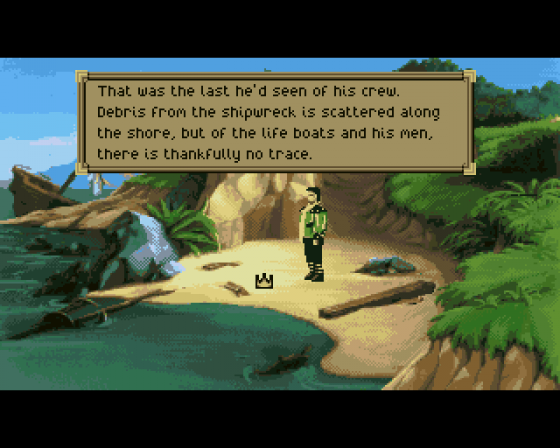 And actually, maybe that stuff about the storyline isn't absolutely fair. Much of your time will be spent chatting to shopkeepers and wizened old sailors, true, but King's Quest 6 does occasionally manage to pull itself together. One of the islands you'll travel is enchanted, for example, and features a series of bizarre Alice in Wonderland-style puzzles involving insomniac oysters and a rotten tomato who's incredibly rude to you. And then, much later on, there's a great bit where you travel through the underworld to fill up a flash from the river Styx. There aren't a huge number of locations, but most of them have several puzzles to solve, and quite often change when you return to them later.

The graphics are nice, too. Sierra were originally planning to release an enhanced 256-colour version for the Amiga 1200 as well as this 32-colour version, but decided that it looked so good already there wasn't much point. And we're prepared to give them the benefit of the doubt. The scenery's lovely, and there's stacks of animation.

If you draw up a list of the Top 10 point-and-click adventure crimes, though, and held it up alongside King's Quest 6, you could tick off at least eight of them. Yes! It has you hunting around each screen with the cursor, trying to find minuscule objects to use. Yes! Not only that, but the cursor doesn't change when you move over them, so you have to keep reading messages like "You cannot pick up the cliff face" until you strike lucky. Yes! Many of the puzzles are so obscure that you've often no option but to simply try everything in your inventory until something happens. Yes! There are pointless sudden deaths - including one notable one right near the beginning when you're invited to join somebody for a swim in the sea, then promptly drown when you do so and are told that he must have been an exceptional swimmer. 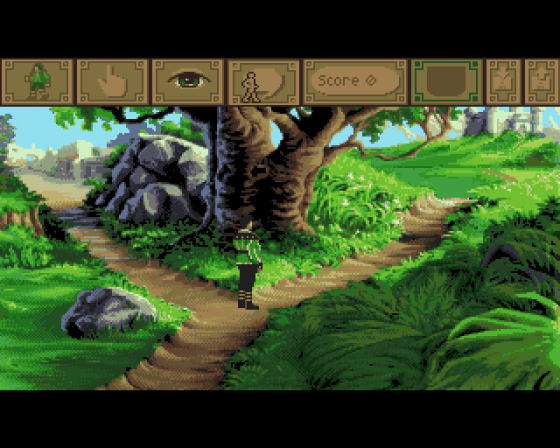 Riled by this, you'll find yourself automatically saving every few seconds just in case something similar happens, with the game's atmosphere suffering accordingly. Saving should be something you do before you have lunch or go to bed, not a routine precaution to be taken before every move.

But, even so, loads of people bought and enjoyed King's Quest 5, and they're unlikely to be disappointed with the sequel. If the basic game engine remains stuck in the past, the storyline's stronger and the puzzles more absorbing. Some of the characters are almost memorable, and some of the jokes almost sufficient to raise a smile.

It deserves to be scorned for remaining stuck in the past while all around it, games like Beneath A Steel Sky aspire to newer, greater ideals. But, at the same time, it's ten disks full of reasonably solid entertainment. And anyway, you'll already know if you want to buy it, and if so, you probably already will have.

My only hope is that, before they get stuck too far into writing King's Quest 7 (reported to carry the even worse subtitle of 'The Prince-Less Bride', indicating some sort of role-reversal scenario), Sierra do actually check their watches and suddenly realise it's 1994.

Uppers: Pretty graphics, and a general hugeness that most other adventures struggle to match. The plot is never actually bad, and often quite good when it puts its mind to it. It's likely to take you several weeks to complete...

Downers: ...although much of that can be put down to the frustrating obscurity of the puzzles, and the defiance with which the game hides important objects in the scenery and then bombards you with tedious responses when you try to search for them. The script lacks sparkle, too, and could do with some attention from a LucasArts defector. And a hard disk is essential.

It's another point-and-click adventure, and a big one with a name that should ensure it sells plenty. But you're unlikely ever to actually think, "That's really good, I liked that bit," while playing it. In fact, you're much more likely to be given copious opportunities to growl, "Grr, how irritating".

It's another point-and-click adventure, and a big one with a name that should ensure it sells plenty. The script lacks sparkle and could do with some attention from a LucasArts defector. 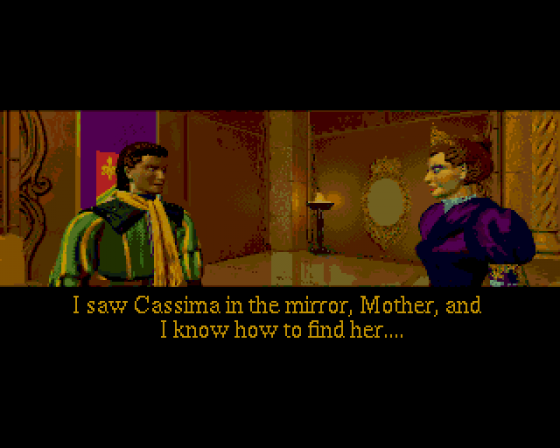 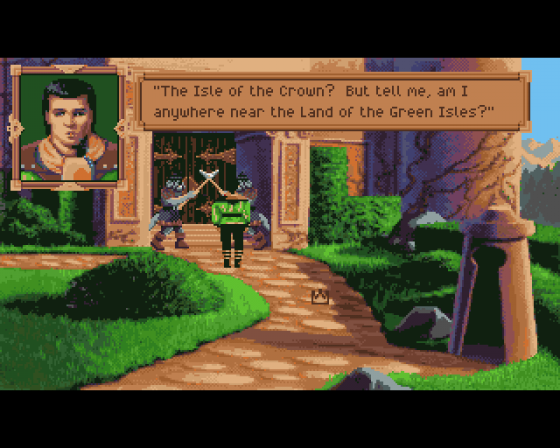 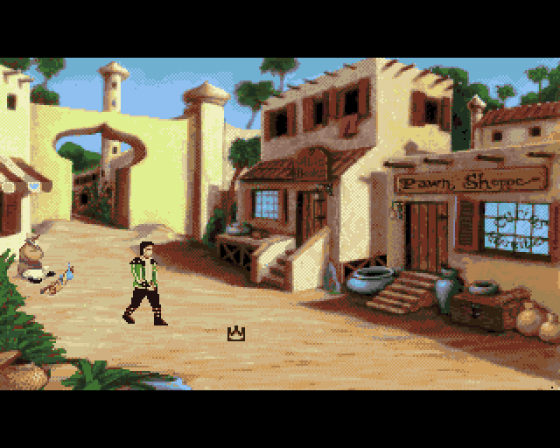 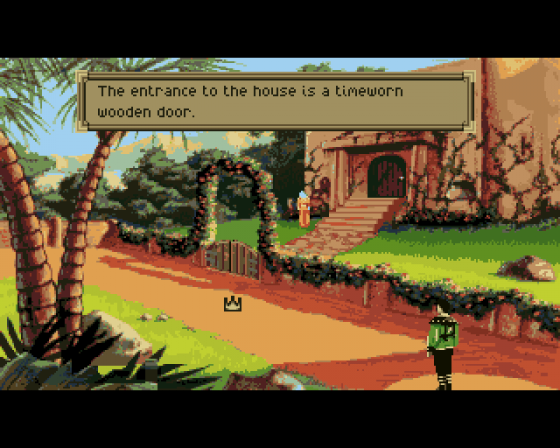 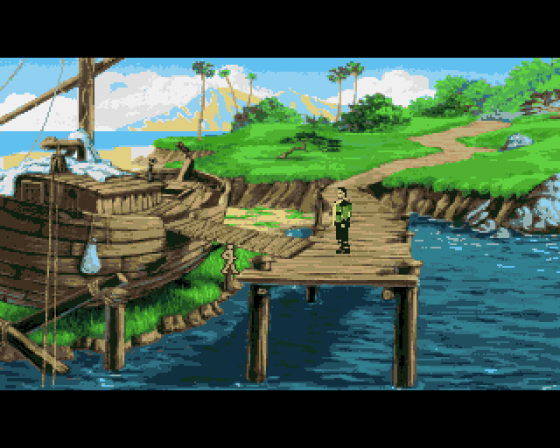