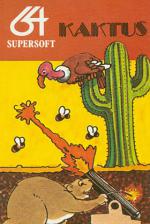 My first reaction was "what a load of rubbish": but after a while the possibilities dawned on me. The mainstay of the program is the swarm of wasps and hornets (yes, I know hornets are wasps) homing towards the base of the cactus, where the tastiest morsels are located.

If you have been crass enough to let them reach ground level they chomp away at the stem and topple your home: and that's one life gone abegging. Show no mercy, pepper them with gunshot - after all, they are excreting some pretty nasty stuff in your direction. Damn and blast! Nearly forgot the mole: the swine insists in plugging up your doorway from one side of the screen to the other. Screen two: the buzzard, a bouncing bomb specialist, makes his entrance. Quite a lot going on now. Did I mention that you mustn't allow the wasp droppings to erode away the soil?

Competent rather than state-of-the-art graphics and sonics; but my first impressions were indeed way out.

Competent rather than state-of-the-art graphics and sonics, but not as rubbish as I initially thought it would be.