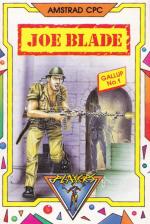 Sometimes it seems that Norns of Fate have a real sadistic streak running through their collective psychological profile. Here's a nicely programmed game, at a good price - and by an unfortunate coincidence Players has released it just as the backlash arrives in the wake of the events at Hungerford. The game, needless to say, features a Rambo-like character wandering around an enemy camp and using his rifle on anyone that gets in his way.

Considerations of taste and timing apart, Joe Blade is good budget fare. You take the role of the American loner on a mission into the heavily guarded terrorist camp where a number of hostages have been imprisoned. Joe has quite a maze of cells, offices, corridors and roadways to explore and the hostages are never found in the same place twice. The screen displays a side-on view of Joe walking left and right along the pathway at the bottom: Doors also lead "into" and "out of" the screen into adjacent rooms.

Unemployment is evidently no problem if you're a terrorist - they swarm all over the place. However, the YTS training scheme doesn't seem to be working out too well, as none of them have got the knack of shooting back at you: They simply pace backwards and forwards across the screen. Touching an enemy does reduce Joe's stamina at an alarming rate, leading to a complete state of death and a short dirge, so the best bet is to mow them down as and when they appear.

Once your ammo runs out, you have to rely on leaping nimbly over the guards, unless you've come across an enemy uniform lying on the ground. Wearing this lets Joe walk about with impunity who's he? - Ed, at least until the uniform inexplicably dissolves. These boys have obviously never heard of fabric conditioner.

Other goodies carelessly strewn around the barracks include food to replenish lost stamina) extra ammunition and cell keys. These don't actually open the cells, but let Joe pass through the any locked interconnecting doors. The keys are as fragile as the uniforms, only working once and then disappearing.

Funnily enough the hostages aren't in the cells anyway, but appear to be having a nice kip in the corridors. The real cell inmates aren't worth rescuing, anyway: They all look like Snow White's Dopey having hysterics.

The final items to be found in the barracks are bombs. Touching one starts a timer, giving you 30 seconds to activate the device before you are killed. Setting the fuse involves solving a puzzle which is probably beyond Johnny Rambo's capability - the letters A to E are scrambled and you have to swap them back into alphabetical order, the catch being that only certain pairs can be swapped. Once triggered, the bomb timer allows 20 real-time minutes to find the remaining hostages and reach the exit before the barracks blows up.

The graphics are tidily drawn in four-colour Mode 1, although the brick wall backdrops get a bit repetitive. Animation of the large sprites is smooth and flicker-free, and the loading screen is also well-drawn: Simple but atmospheric. Sound effects in the game are sparse, but the main menu has a good three-voice tune.

It's nice to find a high-score table that uses keyboard entry instead of tedious joystick contortions. The gameplay will hardly stretch your brain and eventually gets a bit monotonous, but at this price you can't really go wrong.

Players' stuff is consistently good, and consistently underrated - the same goes for the sister companies of Pandora and Interceptor. Perhaps it is this insistence on quality which means that they have few releases, and it is the small number of releases which contributes to the low profile. Still, I'd rather have it this way.

Joe Blade is not the best budget game Players has produced but it is still excellent value for money.

A competent enough pieee of work by the three people involved but lacking in some of the finer touches that really top off a game.

For example, I found it annoying that there is no indication in the score window of the amount of ammunition remaining. Keeping a mental tally isn't really on and you tend to run out when you're in the thick of things. I would also have liked a timer to warn when the enemy uniform is going to dissolve: If it happens just as you're passing a guard you can lose a lot of stamina.

Nevertheless, an enjoyable but undemanding maze game for the price.

An enjoyable but undemanding maze game.