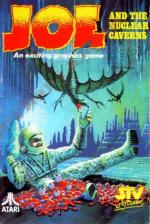 The nuclear power plant at Bizewell is dangerously near to overloading and has to be shut down before the anticipated Big Bang which would reduce the population to 30 million hunks of well done steak.

Fires are raging round the reactor building due to the violent overheating and access is no longer possible. Someone has to go down there and stabilise the system.

Joe, the Charlton Heston of the nuclear disaster, steps forward - although frankly my vote would be for the Minister for Energy to be the volunteer. The only way in to the reactor core is via a series of tunnels and caverns built under the reactor for just such an emergency.

Defence systems were built in, including stalactites and stalagmites, acid pools and laser beams.

Apart from the security measures, the radiation has mutated strange jelly like creatures that creep out of the ground and radioactive birds which will attack anything that moves.

And so Joe sets off in a desperate quest to save us all. I must say with that build up I was surprised that the opening scene was so tame - I felt more threatened in Chuckie Egg.

This is very much a budget game and, for all the scene-setting, a rather unimaginative platform hopping variation. The action is on the slow side, the graphics rather uninspired and to make matters worse, the music is horrendous.

There is no choice in the levels of difficulty, nor are you given the option for two-player mode. Personally, I think it is of rather dubious taste. Of course, death and destruction feature strongly among the best of games and, while wholesale slaughter of millions of innocent aliens, gremlins and general nasties can in no way be condoned, overheating nuclear reactors are somehow more disturbing. Gremlins and aliens live in our imaginations, exploding nuclear reactors live not only in our nightmares but the all-too-recent past.

There is nothing new on offer in Joe And The Nuclear Caverns. The gameplay itself is OK, but overall loses out for having only the one level of difficulty and no two-player option.

There is nothing new on offer in Joe And The Nuclear Caverns. The gameplay itself is OK, but overall loses out for having only the one level of difficulty and no two-player option.