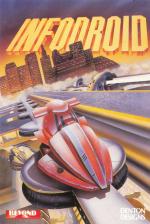 Let me take you to the streets of London la la la Where every alleyway and throughfare is rendered a shooting gallery by the dreaded bikers.

Not the Hells Angels of yesteryear, but the despatch riders following the shortest route between two points without the bother of traffic laws or common sense.

Now imagine the situation in the City of the Future, where droids (robots really) traverse the 15 Great Causeways, delivering packages between the trading companies. Imagine Infodroid, courtesy of Beyond (RIP?).

Unlike the leatherclad youth on a Yamaha, most of the droids (like yours) are well behaved. They pop into a trader, pick up a parcel and drop it off at the appropriate recipient. The idea is to get as much money as possible (some things never change) by using the shortest route and carrying as much as possible at once.

The causeways are arranged as seven parallel bands. The middle band has lifts on it to the traders, service areas and junction points to other causeways. It is stationary. Either side of it are the other bands, one set of three going up, and t'other set going down. The outermost bands travel fastest and your druid can hop between bands to facilitate the old A to B.

Sounds too easy? Well, there are gangs of rogue droids whose operators make their money by attacking and robbing peaceful, law abiding 'bots such as your good, metallic self. And they play dirty.

To help you there are various bits of hi-tech antipiratical goodies available from your local Droiderama Service Station. These cost money, but you'll need 'em. Likewise, you'll need regular servicing and energy replenishment.

Control of your droid is by joystick alone. On the causeway, you hop about in any direction. When you're on the central band, and on a lift, a sharp pull downwards with the fire button pressed moves you into whatever bit you're over.

Once in a room, you can select the functions it offers you by rotating a cube (again with the joystick) which has eight options on each face. These include (for traders) picking up and depositing articles, checking destinations and picking exits. Service stations offer refuelling, buying and selling parts and repairs. Things you might like to buy include shields of various strength, extra thrusters and boosters to make you go faster.

Battling the brigands is simple - don't. You cannot buy or acquire any sort of arms or zapper so you must turn and try to outrun anything that has a go at you. See why shields and boosters are such a good idea?

If you lose a droid, you have (initially) enough credit to buy a new one. If you're good, you can keep enough credit to hand to keep solvent even after a disaster. All your gadgets can be damaged; there's a status display to keep you informed of their current serviceability.

And don't forget. In between all this battling, refuelling and travelling you have to make some money or you go bankrupt. And there's not. much of a market in ex-droid operators.

But that won't happen to you, will it?

I remember Beyond: Incomprehensible icons, joystick control at all costs, lots of confusing displays and a user interface that's as intuitive as a Joyce manual in Mandarin. If these people made nuclear power stations, I'd buy shares in geiger counters. Great idea though, just don't expect to Play it without reading the instructions very carefully.

Aside from the horrendous interface, it's quite fun. The biggest bugbear is the lack of fighting ability, you have to flee asap.

I don't mind games having a plot, I don't mind the inlay card reading like The Lord Of The Rings, but I do mind having to spend half an hour trying to suss out. the game when this is purely frustrating.

Why can't the inlay card just say "go to a circle between two sets of letters and collect a parcel"? There, I've made the game easier for all of you.

Beyond has always been a bit quiet; Star Trek is promised to be good, and what I've seen of the ST version confirms this but Infodroid was launched with a minimum of fuss. And I can't say I'm surprised.

The graphics are very mediocre, most of the game is like a trumped up frogger and the sound is tedious. There is a certain degree of "just one more go" and the idea is clever but the icon system is too clever for its own good.

The graphics are very mediocre. Most of the game is like a trumped up Frogger and the sound is tedious.