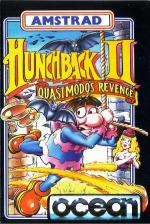 No prizes for guessing that this one is the follow-up to Hunchback. Subtitled "Quasimodo's Revenge", this is one of a series of games released by Ocean all using a speed loader/protector (all of 15% faster than normal) and all of which fail to work on a 664.

The game starts with a garish loading screen which disappears three and a half minutes later, giving way to some music which sounds so jarring and wavery that it is almost funny. You select your options and the screen comes up with "Ready ?". Ready or not the game starts five seconds later but you do get hold and abort keys. The program does allow you to use either the joystick or to define your own idea of what makes a good keyboard control.

The plot consists of wandering through five screens collecting The Bells (Der Bells made me dith way Mathter) while avoiding the best efforts from the bat population and the Notre Dame and District Ladies Archery Association.

Successive screens add fireballs, cannon balls plus what look like low flying clods of chilli con came and are just as devastating.

You leap on to moving ropes, platforms and hooks to get from one platform to another. Strangely, you can manoeuvre yourself in mid air with the joystick thus defying Newtons Law of Commotion. This is necessary because you don't seem to stick to a moving rope, platform or whatever unless you are moving a little bit sideways. Persevere, it is possible.

The last screen has you shinnying up ropes to push clappers against some large bells. Ring all of these and you get to see (but not kiss) Esmarelda. She is only 3x2 character squares small but at least she is there.

The Quasimodo character is quite well depicted and animated as long as he doesn't try climbing a rope. Then he looks like one of those small green beetles that falls into your picnic when you sit under a tree. Animation of the other pieces is not quite so good, the cannon balls especially seem to flicker like a dying striplight when they get near the bottom of the screen and the clappers on the last screen are none too steady.

There is a high score table, you move a cursor around and select your letters from a table on the screen. You can only go backwards or forwards and the rubout does not work properly thus giving rise to some very strange names and/or swearwords.

This game is recommended for all budding campanologists but did not have much lasting appeal to me. Some people might like this game and it is better than its predecessor.

Much better than its predecessor.