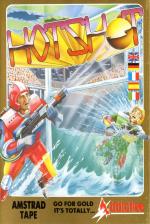 Hotshot is a cross between Pinball, Breakout and the gunfight at the OK Corral, The object is to use your graviton gun to capture a deadly plasma ball, which you then use to destroy blocks or to fire at flippers and bumpers.

You compete against either the second player or the computer. Care must be taken, for if you hold the ball for too long or if it touches any part of you other than the end of your gun, you will be destroyed.

There are five characters, each with slightly different playing characteristics, one of which is assigned to each player at the start.

The game consists of five levels, with bonus levels between each. Some levels give you a limited number of lives while in others you compete against the clock. A target score must be completed at each level in order to move on to the next.

In the first three levels you compete against your opponent only in as much as while you control the ball he is unable to score. In levels four and five it becomes nastier. In level four your aim is to drown your opponent by hitting coloured bricks that raise his water level and decrease yours. In level five you attempt to destroy him by sending his half of the arena towards a mysterious black hole.

Hotshot relies on colour for certain parts of the action, owners of green monitors will find themselves missing out at times.

Strip away all the promotional tosh and you are left with a game that is well presented, simple in concept and great fun to play.

Strip away all the promotional tosh and you are left with a game that is well presented, simple in concept and great fun to play.