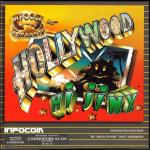 As a kid, you and your cousins spent many happy holidays with your favourite uncle and aunt, the childless-but-rich and famous Buddy Burbank and his wife Hildegarde. Buddy and Hildegarde owned a highly successful film studio, built on box-office hits like Attack Of The Killer Rutabagas and Vampire Penguins of the North. Buddy's creative talents were unique - so horrifying was the climax of his Meltdown on Elm Street, that several movie-goers died of shock before, eventually, the film was banned.

He had his own stable of film stars, including the Rambo-like actor Buck Palace, the Fighting Mailman.

But that is all over, for now, some several years after the massive heart attack which killed Buddy, Aunt Hildegarde is dead. You, their favourite nephew, have been left the entire estate - but on one condition! You must stay in the house and grounds overnight, and by nine o'clock the following morning be present in the living room with ten treasures - nostalgic props and items connected with Buddy's films, which are hidden on the premises.

And so, armed with nothing but a flashlight, a letter of explanation from Aunt Hildegarde and an autographed photo of Uncle Buddy, you are deposited outside the mansion at dusk by the Burbank's lawyer. These last two items come with the package, and the photo contains a touching little poem, so typical of Uncle Buddy, written on the back. One verse, for example, reads:

"Be bold as Captain Bob in 'Cannibal Buffet of the East',
Who agreed to come to dinner, not knowing he was the feast,
Finger-tip hors d'oeuvres were greasy
Sautéed eyeballs weren't so hot
But their mouths began to water when they put Bob in the pot."

With no more ado, you approach the front porch to enter the mansion. Snag - no key, and the door is locked! Not to worry, the grounds are extensive and include a beautiful garden, patio and even a full-blown hedge maze. Over the cliff lies a ladder - but it's too awkward to carry back up. Perhaps the secret is in the maze - but the map found in the mailbox is... well, if that's Infocom's idea of graphics, it's worse than useless.

Two hours later is about the time that panic can easily set in to an adventure reviewer. With the deadline well past when the game arrived at the office, the dynamic Editor having rearranged the production schedules to get the review into the April issue, and still an ominous silence from the Valley typewriter, panic did, indeed, set in.

Round the premises again. Examine everything. There must be a way in. Try climbing the house, try breaking the doors down, search for windows, throw heavy objects around... Perhaps that unopenable hatch halfway down the cliff is the way in? But it remains - unopenable!

I am not thinking the unthinkable. A bad review for an Infocom game, on the grounds that there is an overwhelmingly difficult puzzle at the beginning.

Pull yourself together, Campbell, and be analytical! There's one niggling thing that keeps happening, for no apparent reason, early on each time the game is restarted. Why? Experiment. Come to a conclusion but come up with no definitive answer - a working theory with a million possible alternatives. Logic says the answer is staring me in the face somewhere.

Review time. OK, let's get a start at least, there's the usual Infocom packaging, and extraneous goodies to describe, such as the plastic swizzle stick, the letter, the photo... And suddenly, I break out into a cold sweat. Eureka! Six moves later I am inside the house!

It was worth the effort! Puzzles of the work-them-out variety abound, in this mansion of a thousand surprises. A staircase that flattens when you walk up to it, a cloaks closet with something strange about the arrangement of the pegs. There's a scale model of Tokyo in the games room, and you can watch the very sequence that was used to film 'Atomic Chihuahas from Hell' if you press the right buttons.

Why does the film in the projection room show a meaningless jumble of words? How does the big computer, use in 'Plan Nine From Marketting' work? Why does the piano move in only two directions? But perhaps, above all else, how are you to overcome the fact that there is a hole and a stump in the closet, to get to places you feel have been blocked off from you?

Full of nostalgic and humorous detail from your childhood past, Hollywood Hijinx turns out to be one of the best yet from Infocom. It would have earned full marks had it not been for a few niggling vocab and parser problems.

PICK FLOWERS in a garden full of them produced: WHAT A CONCEPT. GET TULIPS brought forth "You can't be serious". In trying to open a locked door with a punched card I was asked: "When was the last time you unlocked something with a punched card?" I was bitterly disappointed when to my reply YESTERDAY I was chided for entering a sentence without a verb.

Spelling too left something to be desired. MAURADING and REKNOWNED are two examples that spring to mind.

Nevertheless, it's a cracking good game. If you can't get into the house, don't be disheartened - there's always the Valley Rescue Service at your disposal!

Oh - and graphics ratings in an Infocom game? You'll see what I mean when you play it. Nothing to write home about, but when you've solved the appropriate puzzle, very, very clever!