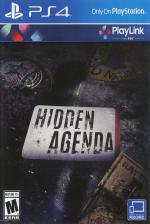 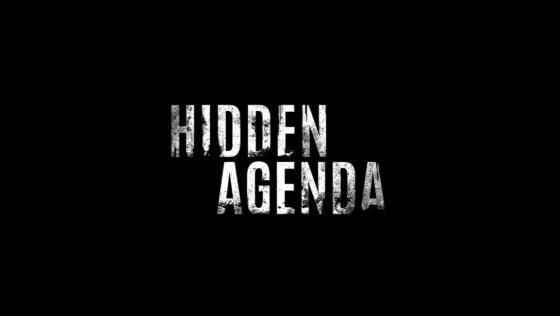 Hidden Agenda is a game I've been meaning to get around to playing for some time because it's by Supermassive Games, who wrote Until Dawn, Man Of Medan, House Of Ashes and a few other Choose Your Own Adventure games. And the good news is... it's quite good. In the sense that, well, I enjoyed playing it. And it's also quite short, with a typical run-through being less than two hours. It's got a plot that's heavily indebted to movies like Saw, Escape Room, the Hostel movies and Law Abiding Citizen - and it makes less sense than any of them! - but it nevertheless all moves so quickly that you might well not realise how incredibly stupid the whole thing is.

Somewhat surprisingly, this is a woman's game. I haven't really seen this remarked on anywhere else, but this is the story of two badass women - the District Attorney Felicity, and the cop Becky. You alternate between playing each one, and must make all her decisions, with around half of them being emotional ones (i.e. choosing whether to be sarcastic or serious) and the other half practical (choosing whether to pull the trigger or not).

Now, before we go any further, I just have to spend more than a bit of time on Hidden Agenda's completely ludicrous plot. So here goes... In a city plagued by unsolved murders, the prologue of the game introduces a particularly invidious individual called Finn, whose particular modus operandi is to kill his victim, but then rig the body in such a way it becomes a trap to kill the police officers unlucky enough to discover it. Hence, he becomes known to the cops as "The Trapper". 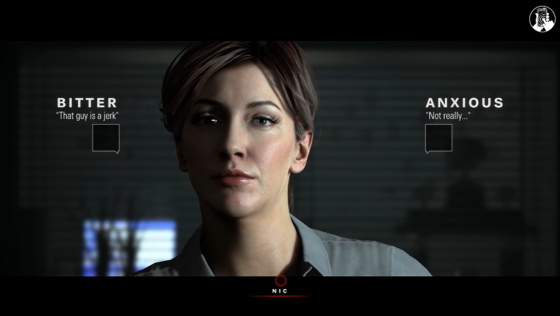 Fortunately, before Finn can polish off his most recent victim, Becky catches him red-handed and arrests him. With the help of the D.A. (Felicity) and a hard-hitting Judge, Finn's sent off to Death Row to sit in Old Sparky. End of prologue. Now we jump forward five years, with the rein of The Trapper having completely ended with Finn's arrest. So far, so good. Except that, with Finn's execution only 48 hours away, he's suddenly protesting to anyone who will listen that he didn't act alone. Of course, nobody's listening... That is, nobody's listening until there's another Trapper-style murder. And, by the "game logic" anyway, suddenly Finn's story doesn't seem so improbable any more, because the cops always kept one particular element of The Trapper's gruesome crimes secret: He always left a rat trap at the crime scene. And guess what the cops found at the scene of the latest victim?

Personally, I genuinely found the narrative of the game quite unintentionally hilarious. I mean, the logical conclusion to anyone with a brain is that the new killer is either one of the cops (who know about the rat trap), or someone that Finn himself told about the rat trap. However, somewhat incredibly, neither possibility seems to occur to any of those who put Finn away. Instead, they all immediately start harbouring serious reservations about Finn's guilt! This is all the more laughable when you bear in mind that, in the initial scenes of the game, Becky actually catches Finn red-handed about to murder a new victim; so the fact she now starts to wonder about his innocence is absolutely mindboggling. Likewise the D.A. proved at trial that all of Finn's victims were paedophiles who had abused him when he was a young orphan, and so the series of murders were Finn's revenge on those who wronged him... and Finn confessed to rigging the bodies to kill cops because he reported the abuse to the cops, but the cops didn't arrest those who wronged him.

I mean, talk about an open and shut case! 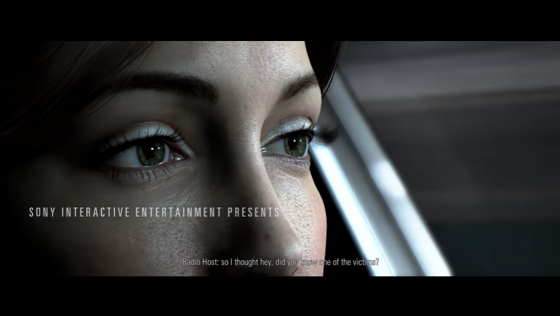 But it gets even better. Depending on what choices you, as Felicity, make in the game, you may approach the Judge and ask him to grant Finn release so he can help the two women track down the "real" killer. And, what's more, the Judge agrees and lets him out! Yes, and the judge later ends up strapped to a bomb in a Saw-style trap. Of course you, as the player, have no choice but to go along with such idiocy. I did it with a big smile on my face, because it's hard to feel any sympathy at all for characters this stupid.

Now, let me also take a moment to discuss the relationships between the characters. Supermassive Games always tend to promote their games with taglines such as "One decision can make waves which change everything". And, on the whole, I found Hidden Agenda to be a much "freer" gaming experience than any other decision-based game I've played (so far). The choices that you make can change huge chunks of the game - heck, you can even kill off a character in the prologue, meaning you get a completely different hierarchy of power in the police department in the game proper. And yet, with a five year 'jump' in the action between prologue and the present day, there are a few things that immediately niggle. Firstly, great play is made of the fact that Becky has been under investigation, in the meantime, for corruption and mishandling evidence in unrelated cases. Secondly, the sexual tension between Becky and Felicity, especially in the opening scenes at Becky's apartment, is so strong you could cut it with the proverbial knife. (I seriously wondered whether the two of them were going to get through discussing The Trapper case without making love on top of the file of papers!) And yet, no matter what decisions you make, you cannot explore either of these facets at all. And that's despite the fact, there are a few hints that ooh yes these two definitely got jiggy with it in the past!

OK, how does the game play? Well, Hidden Agenda is really more movie than game. Quite surprisingly, you don't use the PS4 controller to choose between the options it presents to you, you use your mobile device instead, downloading the Hidden Agenda app and connecting it to your WiFi network. An interesting gimmick, I suppose, although one that will of course render the game completely useless when the app is no longer available. (Couldn't they at least have included an option to play it with a PS4 controller? Sheesh!) You also have the option to play it with up to four of your friends, as a sort of 'dinner party event'. I'm not sure how many people would really bother with this, but the game's short enough that it will definitely work if you've tired of hosting murder-mystery dinner parties and your WiFi will support the load. 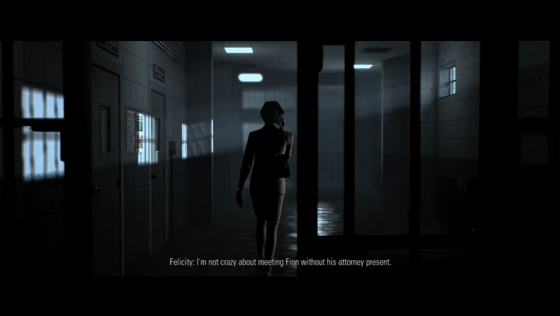 Graphically it really couldn't be any more perfect. I didn't spot any rendering glitches and the music, sound effects and voice acting are superb. In fact, there's only one more thing I found to criticize about Hidden Agenda: the abruptness of some of its endings and, to illustrate the point, I'm going to draw on a story from my childhood that Hidden Agenda put me in mind of for the first time in about thirty years.

When I was a teenager, The Lost Boys was a popular film. In The Lost Boys, a group of teenagers find out that their hometown is the hunting ground of a bunch of extremely handsome vampires, led by Kiefer Sutherland. The girls in my class were gooey-eyed over this movie, and I was fortunate enough to have a pirate copy of it on an old Betamax tape, which made one of them cosy up to me and ask me if she could borrow it. Now in those days I was a very evil little boy and I readily agreed. However, I decided to make a "special" copy for her...

In one particularly iconic scene when the kids are fighting the vampires, the kids beat a hasty retreat into an old jeep and yell "Burn rubber!". The driver releases the clutch but has, unfortunately, left the car in reverse, leading to all the kids screaming hysterically as the jeep careers towards the edge of an extremely high cliff. In the movie, the driver manages to find the brake a second before disaster, and the gang live to fight a few more vampire battles. However, at the same time as The Lost Boys was popular, Raiders Of The Lost Ark was also popular and, in this latter movie, Harrison Ford rams a group of Nazis in an old jeep off the edge of a ravine.

And, well, you can perhaps guess where this story is going...

Evil genius that I was, I recorded the entirety of The Lost Boys right up until the jeep scene, then spliced in the five seconds or so of Raiders Of The Lost Ark showing a jeep hurtling off the edge of a cliff and exploding into flames, faded that to black and then recorded The Lost Boys' closing credits on the end. It all worked surprisingly well and was pretty amusing to watch, because it was so abrupt, and of course it left about a hundred unanswered questions.

And yes, this is how practically all of Hidden Agenda's endings play out. The plot is not just confusing as hell, no matter what decisions you may make, no matter what ending you receive, it seems to wrap itself up in five seconds flat. You can get shot, suffocated, burned alive, shot and then burned alive, or you can die in a four-way Mexican stand-off a la Reservoir Dogs. But, however it ends, whether good or bad, the credits roll instantly. One minute you can be completely absorbed in the game, the next it's over faster than a balloon going pop. And, unlike every other decision-making game I've played, there's no replaying a certain choice, there's no saved position, there's not even 'Play Part 1, 2 or 3'. It's all the way back to the very beginning, necessitating watching the whole movie all over again. I managed it twice, then I was off to YouTube, as I suspect will be most gamers.

Now, none of these points make the game unplayable. I have no idea why Hidden Agenda is called what it is, but nevertheless I suspect most people will really enjoy it. Not, I hasten to add, because it's so clever and so beautifully rendered. Rather, because it's all so madly over-the-top that you really can't take it seriously. I suppose the nearest thing I've played to it was Heavy Rain, which, in contrast, took itself far too seriously and lasted way too long. So if you can forgive it its daft plot, its abject silliness and its perfunctory conclusions, this is a good choice for a Saturday night gaming session although it's won't be useful for much more than that. Perhaps you'll even be persuaded to make sensible decisions rather than the much-more-interesting reckless ones. Perhaps you'll even manage to get through it without smiling. But I doubt it.

It's more movie than game, but if you can forgive it its daft plot, its abject silliness and its perfunctory conclusions, this is a good choice for a Saturday night gaming session. 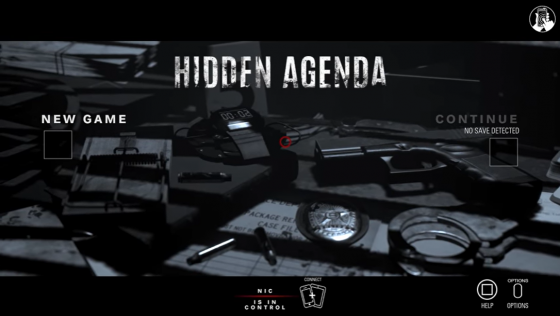 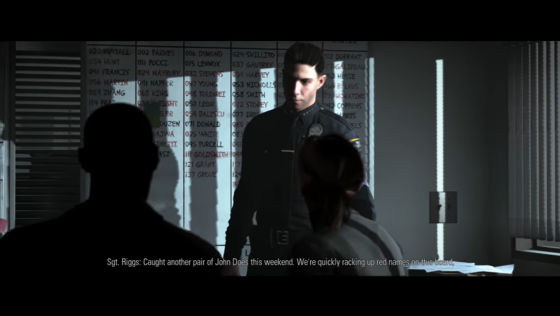 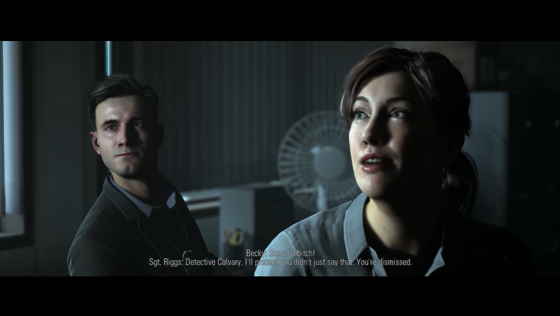 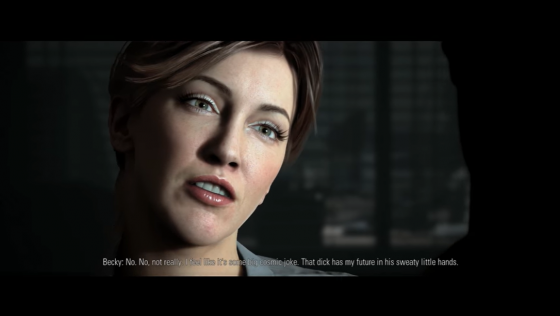 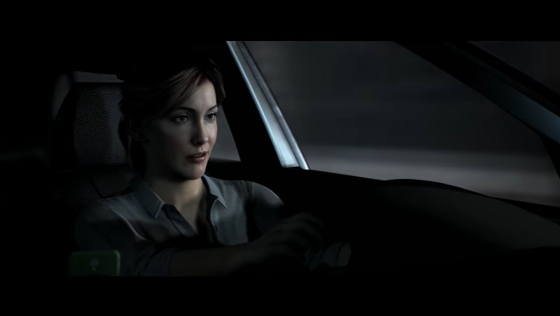 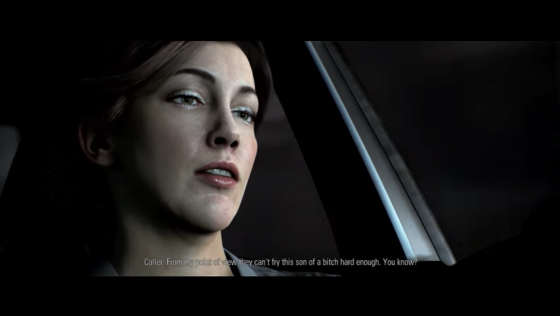