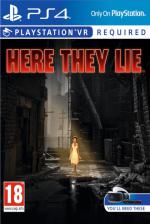 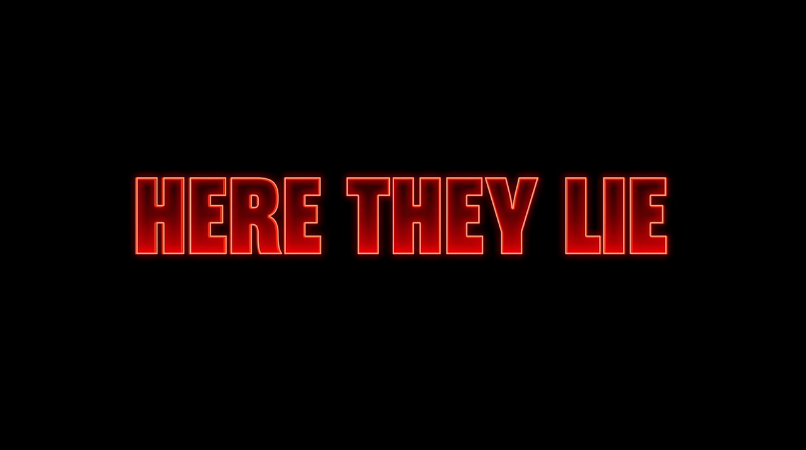 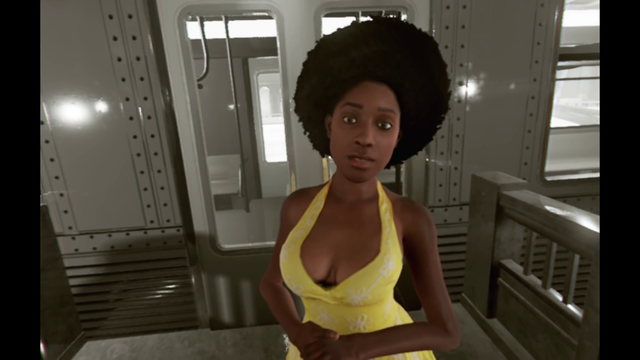 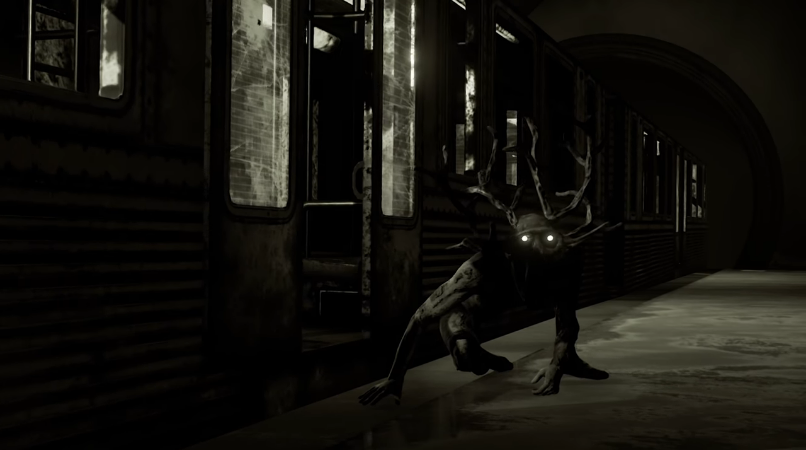 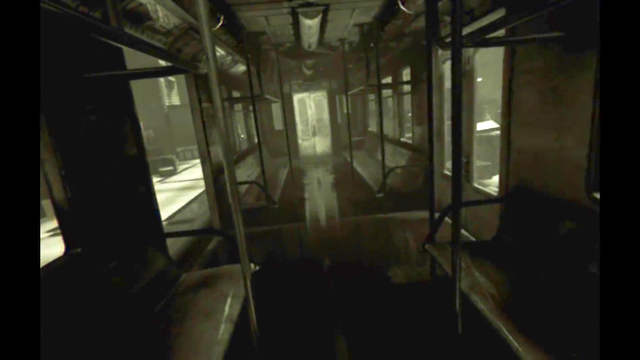 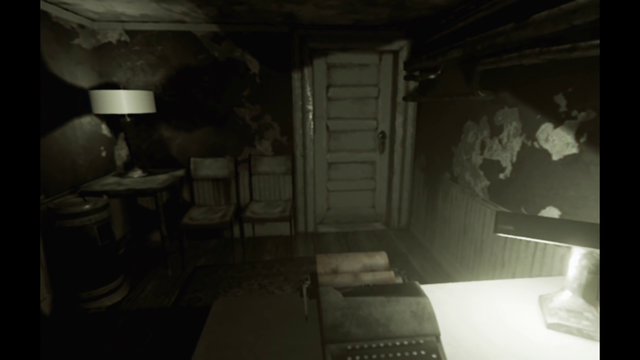 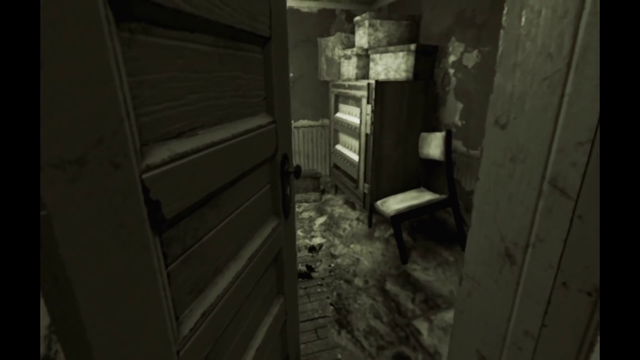 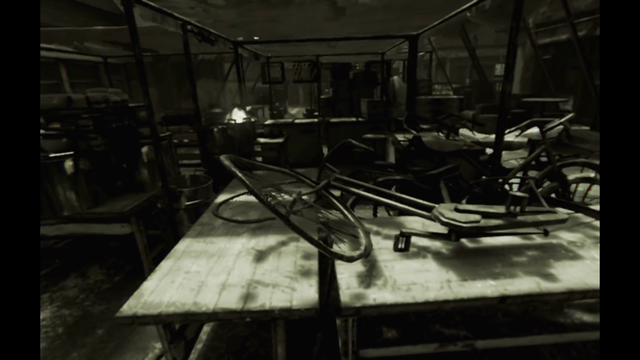 I recently pulled out Here They Lie from my PS4 VR games collection. It was one of the first VR games and I paid full price for it way back in 2016. Back then I played it through in stages, taking a break when it told me to and marvelling at the new technology and the 'immersion factor' of Virtual Reality. However, I didn't really understand what it was all about. I thought at the time that it might be one of those 'layered' games, one that you need to play through more than once to understand it. But, having run through it again, I'm still none the wiser.

The game starts with a mysterious woman in a gold dress, Dana, gazing at you somewhat vacantly, whilst you stand opposite her on an empty underground train. After a while she departs the scene and leaves you alone in the carriage, which feels claustrophobic and menacing. In fact, claustrophobic and menacing is about as good a description as any for the entirety of Here They Lie. The feeling of dread that creeps over you lasts throughout the whole thing. If you play through it all from start to finish, it weighs in at about three hours, and during that time you'll fear turning every corner of its nightmarish world. This game is the PS4's equivalent of Don't Look Now with Venice's canals replaced by shanty towns and the girl in a red coat replaced by flashes of Dana looking despondent and asking rhetorical questions which you'll puzzle over for deeper meaning.

So who are you and what do you have to do? Well, neither of these questions are answered.

OK, so where are you? Well, in some sort of weird, abandoned city. If you ever caught the hentai movie Urotsukidoji: Legend Of The Overfiend, imagine being placed in the city as the fiery god Nagumo desecrates area after area. I mean, we'll have to gloss over how the electricity supply still works, phonelines still operate (because payphones regularly ring as you pass them) and the not-so-insignificant fact that the trains are still operating. But essentially you, and whatever's still alive after the carnage, remain at the mercy of a giant, fiery red, 500ft tall glowing-eyed demon. He first makes his appearance about halfway into the game and if you're not instantly terrified, you're a better man than me. Here They Lie isn't the type of game that gives you any weapons, or even the ability to do anything other than run away, and morbid curiosity in its post-apocalytic world will do nothing more than get you killed.

You're not alone in this city though. Freaky human-like figures wander around, exhibiting primitive and animalistic behaviour. Some of them run towards you, some motion you over, shuush you and one even follows you like a lost dog and begins masturbating whenever you look toward him. It's confusing, and it's disturbing to the point of being unsettling. It leaves you feeling weak, stressed and vulnerable in a way that I've never experienced from any game before. Small wonder then, that Here They Lie is actually revered as one of the PS4's "best" games, so if you haven't played it yet, this might well be a good time to break off from this review. I haven't given away much yet, and this is the type of game where you really want to come to it without any expectations, so that you might experience its intensity to the full.

Still here? OK, then, let's go... Here They Lie is a mature game. I can imagine it putting the fear of God into younger players and, frankly, it might even prove problematic to those with a weak heart. It has jump scares that come out of nowhere (which had me screaming like a girl) and scenes which are like a bad acid trip. You'll find yourself strapped into a chair and hypnotised by a skull-masked dominatrix. You'll find peepshows straight out of Eighties' Soho with animal protagonists who will react to your presence. In one scene you'll wander into some sort of makeshift cinema where innocents are hung. They choke and expire to the cheers and hysteria of an audience baying for blood. The variety is staggering, as you blunder (running, mostly) from one scene to the next, your heart in your mouth. The most amazing scenes occur towards the very end, when you take a final tube ride through what looks like hell itself and Lucifer himself strides past the windows.

It's technically brilliant. It's state-of-the-art. It's what you got your VR headset for. It's better than going to the cinema. It's more terrifying than any movie you could imagine.

Indeed, there's even some nods to some horror movies in there. Remember Kubrik's The Shining with its pool of blood seeping out from the hotel elevator? The ticket booths in Here They Lie's tube network have the same affliction.

And yet, ummm, is it really a game? This is a good question. You can move yes, you can run, you can walk and you can get from scene to scene. There are nasties which roam around and will rip you to shreds as soon as look at you. You can die, yes, and when you do, you move to an ocean, watched over by the silent shadows of your former dead selves - yes, even this is done with such style and some ambiance that the immersion does not break. Yet for all of this, you could make the case that this is, like all walking simulators, more of a huge Tech Demo than a playable game. You basically have only two real choices in the game - whether to bludgeon one of the denizens of this underworld to death when forced into a Fight Club-style arena, and in the finale, whether to take the hand of 'Buddy', or to smash him to pieces with a hammer instead.

As someone who has been largely converted to the walking simulator type of game, I have to admit I did really like Here They Lie. Like I've made clear, I can't really claim to understand it. What I can glean is that an apocalypse has indeed happened - mankind has been wiped out, and you, the protagonist, are Earth's original creator, surveying the post-apocalyptic world of its new breed. The final choice is a metaphor for trying for a second time or giving up completely, and Dana, the mysterious woman in gold, represents the power of creativity and The Supreme Feminine. Well, it's either that or it's all just meaningless jump-scary bollocks for no real reason at all.

The control system is a bit primitive - you use the PS4 controller to run forwards, but you angle your head to change direction, or to push the left joystick left to rotate through 20 degrees, or back to turn around on the spot. When you do this, there is a quick fade-out, fade-in effect. I imagine this works better than a motion-sickness-inducing fast scroll, but it's a bit more clunky than some other VR games have managed. Using the PS4 controller to get around also means that you don't have "hands" in the virtual world which means, essentially that you're a disembodied head in it. When moving around, using your head to navigate the twisty-turny passages of the city feels a lot like riding a Segway.

On the positive side, there are some very interesting effects included: looking at yourself in the mirror, having dust blown in your eyes and being torn limb from limb in flashes of tortuously bright light, for example. Graphics are dull, for the most part being a sort of sepia or black and white, with occasional flashes of colour signifying extreme danger. However, that's not to say that the textures are not realistic. And sinking through solid floor in the introduction almost made me lose my balance! Oh, and the sound is eerily brilliant.

I could probably find a hundred more things about Here They Lie that both baffled and amazed me in equal measure but, funnily enough, I didn't come away from it feeling like it was the best thing I'd ever played. This might be because the premise isn't particularly cheerful, and running around scared half to death whilst not really understanding what's going on is, well, a little depressing. So whilst I liked it overall, I have to say it is really is a bit of an emotional rollercoaster. If you like point and shoot, or Escape Room type VR games, it might not be your cup of tea at all. Here They Lie is true horror - scary, claustrophobic, unfathomable, bloody and raw. It's already gained a cult following and it really is a work of art. If you haven't seen it yet, it's well worth experiencing.