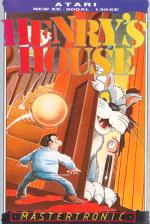 Poor Henry has got a bit of a problem. Although daddy happens to be the king, this hasn't stopped him from going where he's not supposed to - the royal laboratories. Nor has it prevented him from drinking a potion which he shouldn't!

All this has resulted in a six inch high prince in a lot of trouble. Henry must now traverse many different rooms, collecting items on the way that will restore him to full size. These vary from eggs and food mixers, to boots and crows - and some rooms contain televisions.

As you've probably guessed by now, you play Henry in this platform-jump-collect game. But somehow this has something which other offers like Jet Set Willy didn't - it's highly playable. In addition, control is a lot easier than in similar games.

Though the first few screens are a little difficult to start with, once you have managed to navigate your way through them things seem to fall into place and the game gets progressively easier.

One thing I didn't like was that you die if you fall from too great a height. I can only suppose that if you're six inches tall, everything's a great height.

The graphics are excellent and the sound adequate - I especially liked the rendition of Rule Brittania at the beginning. The game is certainly worth £1.99 of anyone's loot.

While the plot may be pretty thin for what is essentially a platform game with royal overtones, this is a must. We certainly were amused.

While the plot may be pretty thin for what is essentially a platform game with royal overtones, this is a must. We certainly were amused.