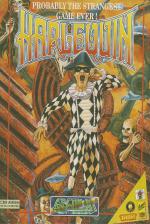 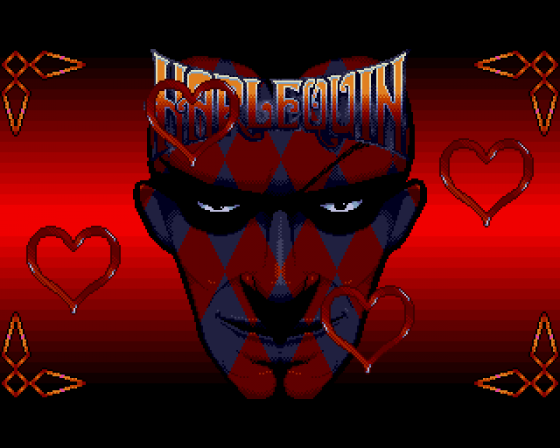 Last year might not have been a vintage one for the Amiga games industry as a whole, but one genre certainly did pretty well out of it. The platform game was raised to new heights (no pun intended) in 1991 by the likes of Chuck Rock (genuine cartoon graphics and design with imagination), Switchblade II (big, bold, brash and brilliant), Toki (a perfect coin-op conversion), Rodland (a better-than-perfect coin-op conversion!), The Blues Brothers (playability taken to the extreme), Scooby-Doo And Scrappy Doo (gorgeous console-esque cartoon action at a giveaway price) and First Samurai (technical supremacy for once accompanied by magnificent gameplay). Two things suggest to me, though, that platform-game-wise, 1992 could make 1991 look like 1977. One of them is Titus The Fox (the follow-up to The Blues Brothers, previewed in this issue's True Stories), and other one is Harlequin.

Now, the most alert amongst you may remember back as far as issue seven, when our erstwhile Dep Ed Colin Campbell reviewed Millennium's Robocod (heretically claiming it might even be "better than Rainbow Islands", for which he was promptly sacked). Now, while Robocod is a fine game, it has to be said that for some of us here it was just a bit on the, er, empty side. While undeniably beautiful-looking, for the most part it was largely lacking in all-important action - hardly surprising considering how horribly jerky it went when more than a few sprites came on screen.

Harlequin is, in many ways, very similar in look to Millennium's game (in some parts it's very, very similar indeed) but where it differs crucially is in the fact that there's never a dull moment. From the word go, you're assailed by all manner of surreal nasties in large numbers, and the flow doesn't let up until the moment your be-chequered hero breathes his last. But that's not to say that you're dealing with a brainless hack-'em-up in the style of, say, Gremlin's Switchblade II. Harlequin has much more in common with arcade adventures like First Samurai, with lots of thoughtful and tricky puzzle-solving to do if you want to see every single level of Chimerica, the dreamworld where the game is set. For a quick example of what I'm talking about, let's take a look at the first stage. 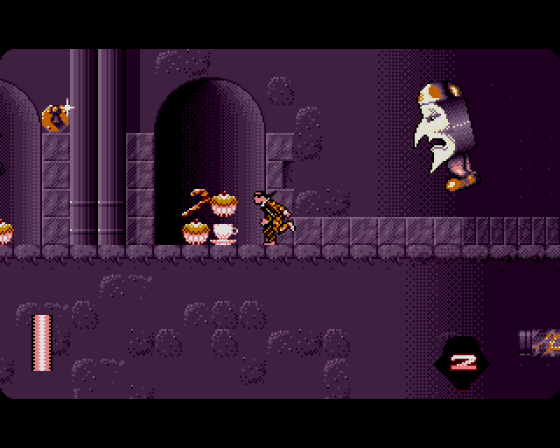 The level is based around a giant clocktower, whose clock has actually stopped. You begin at the foot of the tower, beside a huge door which is locked and bolted. You have to negotiate your way to the top of the tower (strangely reminiscent of the classic Nebulus, this bit) by way of platform-leaping, finding switches as you go which move certain platforms, removing certain obstacles and so on. Doing this will get you to the top of the tower, where you can flick the switch which opens the tower door. Get safely back down to the bottom and you can go through the door, entering the inner workings of the clock. Battle your way through this stage by the same method, and eventually you'll be able to fix the clock mechanism from within.

Now all you have to do is get safely back out and climb up to the top of the tower all over again, where you'll see the hands of the clock whizzing happily round once more. One well-timed jump will see Harlequin grab onto the end of the clock hand, from where he can leap off and catch hold of a kite positioned at the 11 o'clock position, which will carry him (via a bonus stage) to the next level. Phew. One level down, only twenty odd more to go...

Don't think there's little to Harlequin but sheer scale though. The highly believable Alice-In-Wonderland nightmare that is Chimerica is one of the most beautiful yet menacing game settings I've ever seen, and the use of colour as a tool of atmosphere is inspirational. From the bright and cheerful pinks of the 'inside-a-milkshake' bonus game to the candy-striped dayglo hues of Heaven or the happy greens and yellows of the Captain Planet-like jigsaw world to the gloomy dark blues of the crypts and the fiery reds glowering demonically out of the blackness of Hell, every level of the game subtly creates a state of mind appropriate to the particular scenario at that point. (There are various routes to the end, meaning you don't actually have to play every level to finish the game, so if you're prone to depression you might be well advised to steer clear of some sections altogether...) 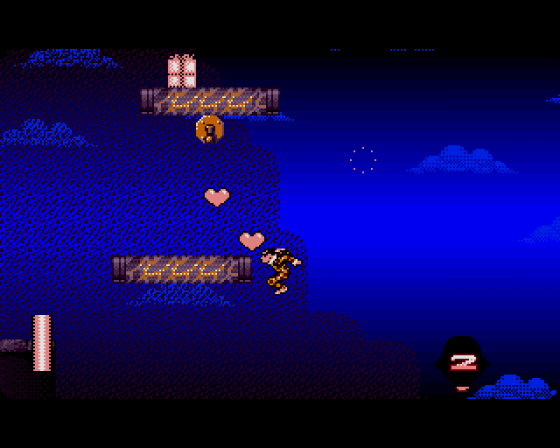 The graphics themselves are gorgeous, with super-smooth movement and much use of arcs and curves (you get to do a lot of rope-swinging in this game, which is an oft-neglected tension-creating device) to counter the often-artifical blocks-and-ladders feel which many platformers seem to suffer from. Of course, the nicest graphics in the world are worthless without playability, but Harlequin's got that in buckets too - your character is controllable to a high degree of precision, which means than when you plummet from a precarious ledge or platform to the bottom of a level you've just spent five minutes climbing to the top of, it's your stupid fault. Certainly this can get frustrating, but the immensely rewarding nature of the gameplay draws you irresistibly back for another go all the same.

But of course, if you're a regular reader of Amiga Power, you'll realise that all of this stuff counts for nothing anyway. When it comes to reviewing a game, the mark we give something depends entirely on how many Nice Touches it's got. Luckily, Nice Touches are something which cascade from Harlequin like 10p pieces out of a fruit machine on a particularly good day. You want Nice Touches? How about the way our hero stands and pants, gasping for breath with his heart beating almost out of his chest when you stop after an especially strenuous bout of running and jumping? Or the little lightbulbs which appear above his head at strategic points through the game, whereupon if he stands still for a couple of seconds, you get a subtle clue as to what to do next? Or how, as you jump along the keys of a giant piano/organ in one level, each key makes the proper note as you land on it, sharps and flats and all? Or that when you're in one of the underwater sections (with Harlequin transformed into a cute fish, still retaining his unique costume design), the hearts he usually fires at baddies appear in little bubbles, and are affected by the water's currents? Or the advertising hoardings scattered through some stages which actually advertise the later stages, and change according to how close you are to reaching them? Or, or, or... well, we wouldn't want to spoil for you completely. On Nice Touches alone, Harlequin bounds instantly to the very peak of the rather colossal mountain that is Amiga platform games, and when you chuck in all its other great points as well, only the very very best have a chance of touching it.

This is an addictive arcade game, an explorer's dream, a puzzling adventure and an emotional rollercoaster ride all in one. Quibbles? Forget quibbles. I'm fed up of having to pick holes in brilliant games just for the sake of an illusion of balance. If there was anything seriously wrong with this then I wouldn't love it, so I'm not going to whinge on about any flaws in might have so I look objective. Reviewing is a subjective art, and as long as it's done by humans it always will be - I think Harlequin is fab and I don't care who knows it. Trust me on this one.

Uppers: Beautiful graphics, exquisite gameplay, a handy save feature, loads of depth and more imagination than every other game in this issue put together.

Downers: The size of your task may prove too daunting for the weak-willed. Can be occasionally frustrating. 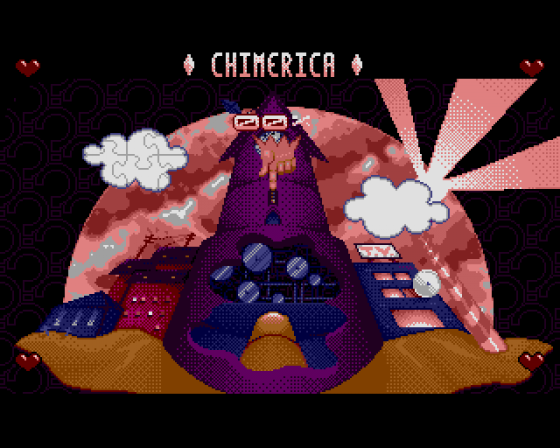 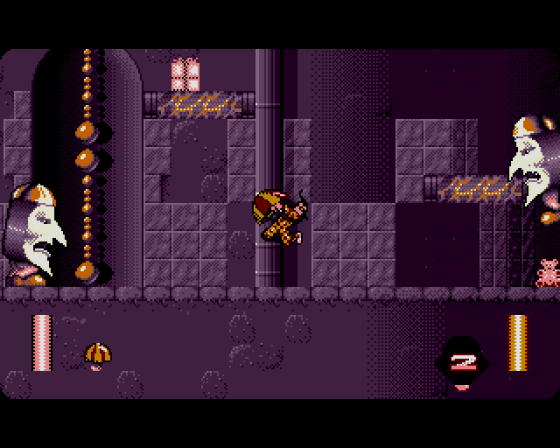