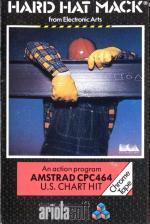 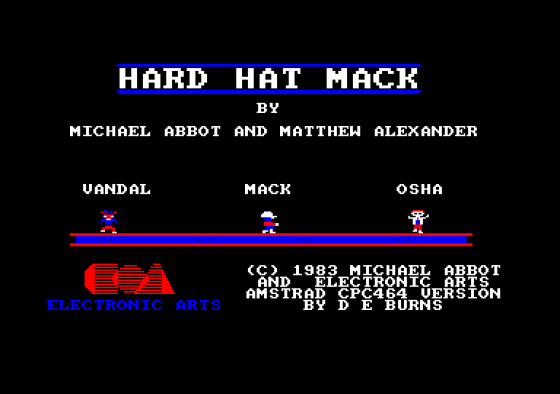 This is another platforms and ladders (or in this case, chains) type game which was converted from the Commodore 64 (this is the version the screen shots on the inlay came from). The inlay says that this kind of game makes your beer taste better, but this is not true and the reliability of tape loads is reduced. It took me two goes to load the thing after dunking it in my beer.

You control a small, hard hatted and thick headed construction worker who runs about the site collecting girders and riveting them in place. On higher levels, the idea is to run around collecting toolboxes and dropping lumps of steel into rivet-making machines. This is not exactly riveting stuff, so a few hazards have been added. There could have been several midget judges. You know; some of those small things sent to try us, but they are more mundane than that.

Also flying around the screen are some rogue rivets (fatal) and a rivet gun. This is useful for riveting the building together (what else do you do with a riveting gun? Stuff turkeys?). There is a snag with the rivet gun, once you have picked it up, you can't put it down, despite what the instruction inlay says about hitting the 'Z' key.

The baddies cannot be destroyed, deflected or thumped in any way. You can only try to avoid them by climbing chains, bouncing off springboards and accidentally falling down lift shafts. If you miss the springboard, an absolutely no expenses spared at all sound effect announces the non-existence of an ex-construction worker.

The graphics are fairly fast moving, done in mode one (four colours) and are XOR-ed. This means that when the little man runs into a pillar, vandal, porta-poti etc, the graphics look a trifle confused. This happens on sorcery too, but in that case the rest of the effects make up for it. This is not an outstandingly good game, or an absolutely crummy one either. If you want to add another platforms and ladders game to the collection,you could do worse than this.

If you want to add another platforms and ladders game to the collection, you could do worse than this. 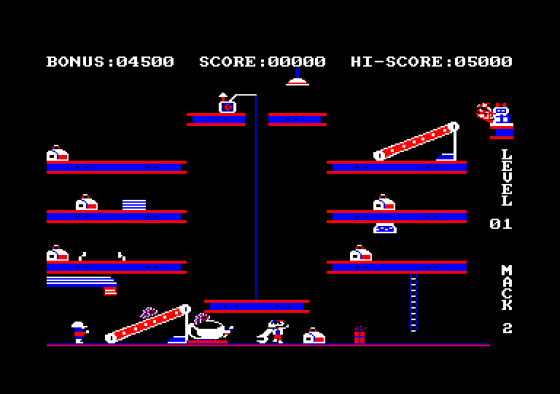 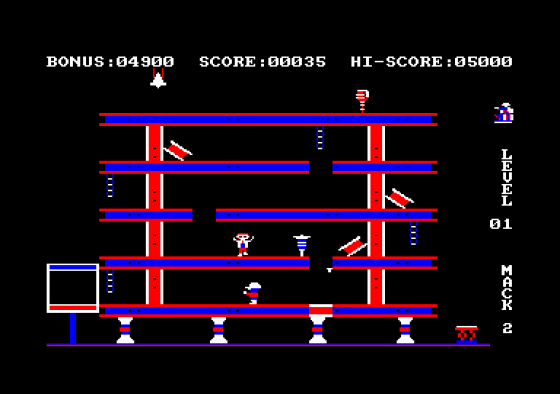