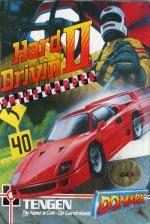 Produce a half-decent game and you're under an immediate obligation to do a sequel. Hard Drivin' gained a respectable 84% when it was reviewed in STF 6, but even then it never quite looked as if it was finished. With the release of the sequel, Domark are obviously hoping to improve on the original, so have they succeeded?

Hard Drivin' 2 comes with four pre-set circuits and a course editor that enables you to alter or even completely remake the standard courses. As with Hard Drivin', some courses have two tracks - one on which to practise speeding and the other for when you feel like posing.

There are two different types of car to choose from - an automatic or a manual gear car, and you can use either the mouse or joystick. Hard Drivin' 2 is better here than its predecessor because it's much harder to lose control of your vehicle. One new feature is the ability to race a friend via a serial link to another ST. In this two-player mode you are the only competitors on the track, so a game consists of a simple race to the finish.

At first sight, the graphics are the same as those in Hard Drivin'. Fortunately, there are no more stray cars floating through the air or driving through hills - the routine that checks hidden objects has been improved. The 3D display is good too, if a little slow. Sound is no different - there's the familiar tune at the beginning and the same growl during the game. Otherwise there's nothing to get over-excited about.

Hard Drivin' 2 is basically Hard Drivin' with four extra tracks and a course editor. There are no radical changes to graphics, sound or gameplay, so the only reason for buying it is if you want the extra course editor. It's certainly not a bad game, and designing courses is great fun, especially when you create something which is completely unplayable. Don't be fooled by the new packaging though - the game is only a slightly improved version of Hard Drivin'. Buy it only if you're an avid Hard Drivin' fan.

Not a bad game, but don't be fooled by the new packaging - the game is only a slightly improved version of the original Hard Drivin'.