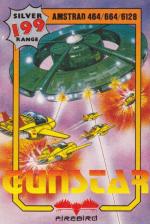 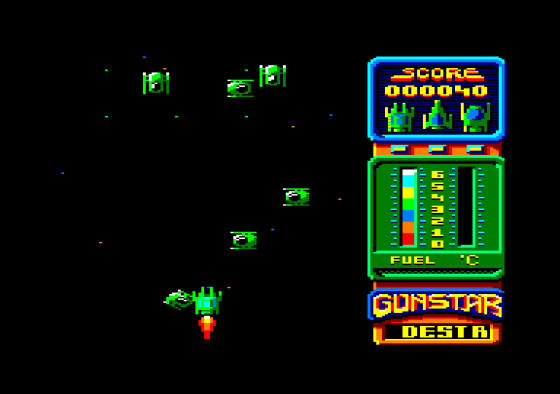 Are you sitting comfortably boy-things, girl-things and Vl'hurgs? Then begin. A long, long time ago in a galaxy sufficiently far, far away to avoid legal complications there lived a little Japanese programmer called Lego-Brix. He had written a game called Space Invaders some months previously, and was feeling very pleased with himself. The game was making his company much honourable wampum.

Then in burst his boss. "Lego-brix", he said, "We have new machine for you to write program for. Look, it has a colour screen and an even bigger coin box. So go to it, my son". And with that, the boss disappeared in a cloud of cliches.

Lego thought for a minute. Why change a good thing? 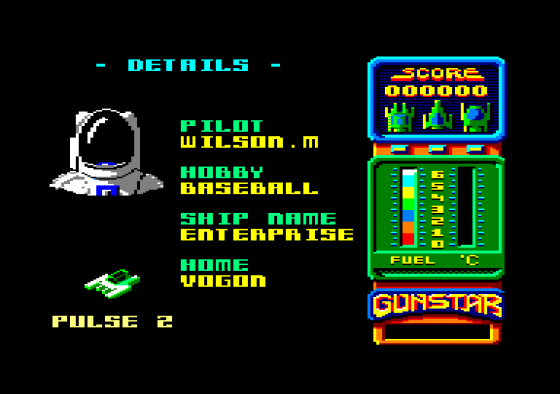 So he kept the invaders wandering about at the top of the screen, but made them spin and drop down occasionally to add a little spice. Then the fighter ship at the bottom had to dodge flying rocks, and eventually dock with a mother ship to refuel. A touch of colour, and the job was done. "Galaxians!" thought Lego-Brix, and got even smugger. And that was the start of the art-form known as space shoot-'em-ups. Tradition decrees that no more than the barest minimum of detail shall be changed in each new incarnation of the work. Firebird has followed this edict with Gunstar, to produce a minimally innovative version of the old favourite. That's not to say there aren't frills. Dear me, no.

There are three personas that fly the ships that shoot the lasers that battle the aliens that fly down the screen to invade good old Urth. Before each attack, the computer tells you who is flying this mission, where he comes from and what his hobby is (reading, baseball and pain are all popular, by the way). Then you get to zap the aliens, dodge the asteroids, mangle the robots and dock with the flying gas station.

The valiant fight to obliterate the intruders continues until one of three things happens. The ship can come into undue proximity with a bit of spacial debris. This can be an alien ship, a bit of asteroid or the good old fashioned blast from a gun.

Failing that, the engines can consume all the fuel before there's a chance to dock. Known as the M25 effect (after a famous highway on Old Earth where errant salesmen were doomed to drive around in circles and Cavaliers until they dropped), this can be a little disconcerting. Not to say fatal. The last and most avoidable death is brought about by firing lasers without a break until they melt and go whoooo-mph, as lasers do.

But, oh fortunate fellow, the engine temperature and fuel level is displayed in an easy-to-read colour coded format to the left of the main viewscreen. Thus the truly skilful can wreak maximum havoc and still make it home in time for a spot of brekky. And bear in mind, as you saunter through the galaxy. the soul of LegoBrix, without whom we would still be playing BreakOut. What? Oh...

Now I'm as capable of losing myself to a bit of alien bashing as the next man. I mean, if it wasn't so popular there wouldn't be all these games doing it, would there? And by the modest (bog) standards of shoot-'em-up as they-shoot-down, Gunstar almost makes the grade.

The only fly in the woodpile is the looooong wait between one's ship being zapped and one being reincarnated - 20 seconds (count 'em) of meaningless sequence. Soon makes me reach for Lightforce...

I was in just the right mood for a bit of mindless zapping when I picked up the review copy of Gunstar. Oh good I thought, a budget game. No instructions to wade through, just grab the joystick and go. There may have been loads of games like this before, but the reason for that is that they are fun. I was a little upset about blowing up when my laser overheated but all the same I enjoyed the blast.

Grab joystick. Push left, little blob goes left. Likewise right. Press big red button, laserfire rips skywards. Down come the aliens. Bang. Pop. Boom. Yup, all there. It's even quite fun, and the little dashes of meaningless text in between lives adds atmosphere. Hope the Ed will forgive me, but there's nothing left to say. Except it's just about worth two quid.

No instructions to wade through - just grab your joystick and go. There may have been loads of games like this before, but the reason for that is that they are fun. 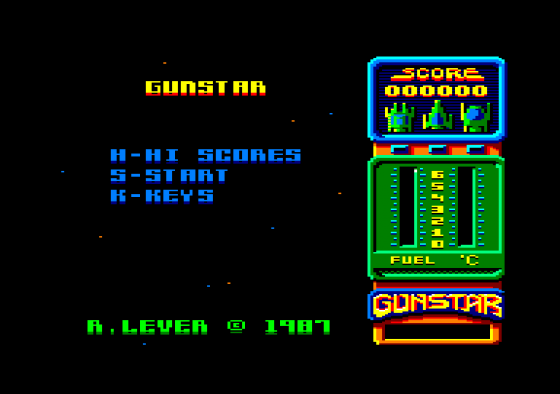