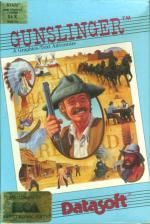 In this graphical text adventure you play Kip Starr, an unemployed Texas ranger who has just received two telegrams from his old buddy, James Badland. The first tells you that Badland is in a jail south of the border and, if this isn't enough, the second informs you he is about to hang in two days.

Not wanting to let your old friend down, you pack your bags and your trusty six-shooter and get ready to leave. Then, out of the blue, yet another nasty telegram arrives.

This one is much more sinister: "We've escaped from jail. Just a warning for you and that buddy of yours. Signed: The Dalton Brothers (all six of us)".

Your prospects don't look so bright when you find yourself stranded in the desert after riding your horse to death. But things pick up when a traveller comes across you and offers you a ride into Dawson City.

So there you have it: All you have to do is break into and out of jail. Then you must keep your appointment at the OK Corral for a shoot-out with the six Dalton brothers. Simple.

You find adventure in a gold-rush ghost town, an Indian village and a US Army fort, all generously scattered on your way to Mexico to save friend James from the hangman's noose.

Many other diversions stand in your way in the form of crooked poker games, runaway mine cars, dangerous waterfalls and ambushes. These are all presented using more than 100 very effective hi-res picture screens.

You can enter commands from the keyboard - in a fashion all keen adventure players should now be familiar with - or use a combination of joystick and keyboard inputs: A novel approach and fun.

The screen shows your location on the left and a menu of verbs, nouns and prepositions on the right. You can also bring a compass on to the screen by moving the on-screen arrow into the area just to the left of the command screen. You can save a game at any time by highlighting the SAVE command in the verbs box. Whatever you do, don't save a game on a master disc.

If you are new to this form of entertainment here are a few hints: Always save at regular intervals - the West is very dangerous and you can be killed at any time. Make a map - it's always useful to know where you're going. Also, watch out for the Indians - they have a habit of collecting scalps.

All the items you find will be used for something, so don't go dropping them. A horse can make all the difference, so be careful where you leave one, and remember stealing one is a hanging offence.

If you encounter a dishonest character - and there are a few - remember this is the West and your gun speaks the only truth. For example, when I went into the saloon for a game of cards the man opposite me cheated. I didn't ask him to apologise. I just shot him dead... and he turned out to be Jessie Dalton. Only another five to go!

The adventure is one of the largest I have ever played. The pictures are excellent, and I especially liked the one of the card player staring at me over his hand just before I shot him.

It's very playable and quite humorous in parts. Although not the most intriguing game ever, some thought is needed if you want to finish and save James.

If you like adventures and fancy something a little different, Gunslinger is a must. Its originality and ease of use make it a winner.

Its originality and ease of use make it a winner.