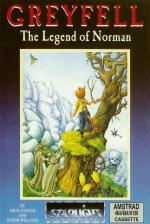 Time for a strange tale concerning the end of a cat. The evil Mauron has stolen the Orb of Life from the land of Greyfell, and chaos walks abroad. One cat, braver and drunker than most, decides to undertake an Epic Quest to overthrow the orbsnatcher and restore light and happiness to the benighted place. In short, this is the legend of Norman. Now you're Tolkien.

There are the customary obstacles in the way of Norman the moggy on his valiant search. As well as the standard issue adventurer stoppers (rats, wolves, killer tomatoes, crocodiles, skeletons and others of that ilk), there are little delights such as the cat-eating plants, the minotaurs, the Lord of Mirrors and so on and so forth. Most if not all of these are bad news to touch, and some (like the felinophagic vegetables) are positively killers, my dear.

Being a cat does have its advantages. Nine lives is possibly the foremost; the next most life-prolonging attribute is the ability to cast spells. The three that Norm sets out with are Bubble, Cloud and Freeze. All of them are aptly named. All of them kill rats. The rest of the monsters, if they succumb to any spell, only succumb to one. You have to find out which one to survive.

There are numerous small buildings dotted around Greyfell which may well contain clues. Unfortunately, they also seem to contain a variety of cactus to which Norman is especially prone. When you consider that some of these places are pitch black, only lit briefly by the stray light from Norman's magical demise, you should begin to understand the enormity of the task facing our rapidly-sobering hero.

There are people of Greyfell who are prepared to help him. They carry useful bits of cryptic information around with them, divulging away on contact or on being bribed with a suitable object. These characters include Blotto, a drunken rabbit (there's a lot of boozing going on in Greyfell), Potbellius the landlord bear and other quaintly named animals like Offalorien the spy. Beatrix Potter meets Harold Robbins.

There are some surprises in store. I mean, would you expect to find an area with low flying meteorites? Still, it is apparently possible to use just this sort of thing to your advantage, by meteorically bumping off a few of your less welcome followers. Failing that, you can always try punching them or even some of your limited spell power.

Adventurers will note the options available gamewise. There's a save-to-memory facility (but not a save-to-tape). Various spell casting and object juggling can be done through a fairly off-the-shelf icon system at the bottom of the screen. Failing everything else, there's a Throw in the Towel coupon in the instructions which will bring ridicule and a hint sheet by return of post (maybe).

And finally Esther, a quick peruse of the multilingual instruction sheet reveals that the Dutch for Stamina Meter is Uithoudingsvermogen. An invaluable aid to conversation should you ever find yourself in Holland on a blind date, I'm sure you'll agree.

Hmmmm... The rather well drawn characters and striking graphics point towards (perhaps, a game for the pre-teenage Arnold owner. Certainly there's not a lot in it for sophisticates, except perhaps the name of the spy character. I tried to find a suitable kid to try it out on, but the local shop had run out.

I dunno. Can you take a game subtitled The Legend of Norman seriously? Plot weak, graphics OK but a bit cute, overall odd but mainly OK.

I cannot think of a single 3D rnazey type game which has been an arcade hit. Perhaps they take too long to play. This would take too long for sure, and the joystick controls are weird. You need to hold fire to jump, and different things happen under different circumstances. A game to be avoided.

Yawn. This is a cross between Feud and every 3D style game you have ever seen. It lacks the cunning of Head Over Heels and the cute graphics which make that kind of game special. It is also terminally slow.

The idea of going into huts makes the map a little more interesting but I felt that it had been slanted towards the younger player because no mature gamester would have the patience for it.

Terminally slow. The idea of going into huts makes the map a little more interesting but I felt that it had been slanted towards the younger player because no mature gamester would have the patience for it.