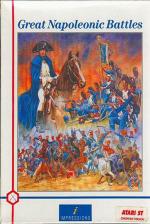 Both short and French. What an explosive combination. Napoleon was always destined for "greatness", especially if it came in the form of winning some major battles before having his low-slung bottom kicked at Waterloo.

Battles were battles then, and with Great Napoleonic Battles, you can relive some of his finest moments - and Waterloo as well. The game is a turn-by-turn hex-based affair which enables you to not only recreate those heady days when everyone had moustaches and an Englishman was worth ten foreigners, but enables you to design your own scenarios as well.

There are three pre-set theatres. Marengo (which he won), Quatre Bras (he also won) and Waterloo (well, yes). You load up each map and set of men separately - very tedious - and, when ready, enter the phases. Both you and your ST (two players aren't supported) move and attack on alternate rounds. There are three types of unit: artillery, cavalry and infantry. Standard wargame symbols denote these, but with only three different types to learn, it's not too confusing. All the data you need on units, terrain and so on can be called up by hitting a key. Simple and accurate.

The combat itself is as dull as it could ever be. Whinnying horses, cracking muskets and the howls of the wounded were never on the cards, but all you get is a rather pathetic burp to indicate the bloody furnace of war is actually taking place somewhere.

What is of most interest about Great Napoleonic Battles is your ability to use the game system to create your own rules, map, unit strengths and positions. Virtually everything in the game is changeable, so if you're a historical wargames fan, you can set up almost any land battle from the last century. Sadly, you can't redesign the messy movement and selection procedures you have to go through.

The game uses a half mouse, half keyboard system which deserved to be strangled at birth. This, combined with the rather noticeable time delay before your ST actually does anything could put you off for good.

Great Napoleonic Battles isn't groundbreaking. It's brightly coloured and clear, but uses those dreadful wargame symbols that no-one outside the Army actually understands. The game jerks along like a survivor of a tough winter campaign, dragging your attention from the historical accuracy of the whole thing and making you annoyed.

If you can live with the slowness and awkwardness of Great Napoleonic Battles and fancy tinkering around with the armed forces of yesteryear, you can do so here. It's got to be the game's biggest selling point - and even then it's not much of one.

Great Napoleonic Battles isn't groundbreaking. It's brightly coloured and clear, but uses those dreadful wargame symbols that no-one outside the Army actually understands.