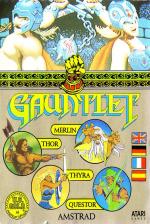 These days fantasy is very much in fashion, spearheaded by the multi-player action of Gauntlet. John Baker investigates various Amstrad versions.

You won't get many to admit it, but fashions and fads seem to play an increasingly large part in the production of computer games. The summer of '86 was Karate, then came Commando-style shoot-ern-ups. But the autumn of '87 can now be officially declared the era of the Gauntlet clone. (Editors tip for the future: Nemesis and Salamander space-based shoot-'em-ups).

Gauntlet? Just in case you've had your head in a bucket for the last year or so, perhaps the word needs some short explanation.

Gauntlet (the coin-op) was an Atari game that hit the arcades just over a year ago - and it had the punters queueing up in the streets for the privilege of putting the hard earned dosh in the slots.

The reason for this stampede? Great fantasy storyline, fabby hi-res graphics, bags of sampled sound - but most of all the multi-player action. Up to four players at a time could battle away through the mazes chock full of monsters and treasure.

Everybody loved it - enter the home computer software producers.

Since then, five different Gauntlet-style games have been released, most recently the official licenced version from US Gold. Which begs the questions: How does it compare to its illustrious forefather and do the imitators offer anything extra?

One of the advantages of a licence is that your basic system design and graphics have already been designed - and praise should go to Tony Porter, Bill Allen and Kevin Bulmer of Gremlin Graphics (sub-contracted to do the conversion) for reproducing both on the Arnold in a very workmanlike fashion.

The scenario is the same, although due to hardware limitations (you try crowding four people around a keyboard) the action is limited to one or two players.

At the start you choose the one or two player option with two player, one person uses keyboard controls) and then select one of the four characters you want to play.

Feeling particularly macho? You could try Thor the Warrior. Spritely? Then Questor the Elf is for you, Magical? Merlin's your man. And if there's a lady in the house. Thyra the Valkyrie is a natural choice.

Each one has its particular advantages and disadvantages. Thor can throw a mean axe and has pretty good armour, but isn't too good when it comes to using magic potions, Merlin, on the other hand, as you would expect uses magic well but hasn't got any armour.

After this, press fire and away you go to Level One of the dungeon. Each level is a maze predominantly filled with monsters, but there are other things you'll not want to hack away at.

Keys must be collected for future use - they open magic doors that you'll come across from time to time. Food comes in handy for replenishing your energy (which slowly ticks down from 2000 from the word go - much faster if a monster is putting the boot in).

Best of all are magic potions - the medieval equivalent of smart bombs. For use in emergencies only.

The items you have collected are shown below the main display, along with the number of points you have scored to date and the energy you have left.

There are six different types of monster you'll find yourself up against - Ghosts, Grunts, Demons, Lobbers and Sorcerers, each more deadly than the last. Worst of all is the black coated figure of Death, who can only be disposed of with a potion.

All (except Death) are created by "monster generators", so it's no good killing all the monsters in a section (either hand-to-hand or much preferably using your missile weapon unless you destroy the generators too.

The dual aims while wandering through the levels are to kill/maim: collect treasure and so on, and try to find the stairs down to the next level.

Sometimes there will be more than one exit - on Level One there is a short cut down to Level Eight, for instance.

And sometimes the maze is so complicated and devious you'll wonder if one exits at all!

Generally, the lower the level the nastier the monsters and the greater the surprises - like poisoned food, traps and transporters. But there are nice surprises too, such as special potions to increase your abilities.

Like the original, there's no doubt that the game is best played multiplayer, with the two of you battling it out against the opposition.

The CPC version does lack the flashy effects of the coin-op - only the ST version will come anything close - but the conversion is faithful to the original and does capture its hack-and-slay spirit.

Don't expect to have to strain your brain too much, but if you want the real thing, this is it.

The first clone to come on to the market, this budget title has all the elements of Gauntlet - top down view, monster generators, energy levels - but is flip screen rather than continuous scroll.

Generally the graphics and animation are inferior, but if you are into quests (rather than carnage just for the fun of it) then Storm gives you a flimsy excuse with the premise of rescuing a damsel in distress.

Electric Dreams stole the limelight from US Gold at the PCW show this year (eventually canting to one of those amicable agreements) by licensing the project from which Gauntlet was actually developed.

Thus it has many of the same elements - but the graphics are completely different and to my mind less effective.

Flip screens again, with one or two players (again, both with the same abilities) and multi-load (like Gauntlet itself).

After much playtesting, I decided I preferred Gauntlet, although you might find the graphics more attractive on the telly.

Telecom Soft's entry to the fray well executed and nicely designed. More a one player game, although a second player can control a Golem when you've learned how to create it.

Druid has slightly more complex gameplay and strategy overall - much more a cerebral arcade adventure than a straightforward bloodbath.

Scrolling screen, single load, it's different enough that you might want to have both this and Gauntlet in your collection.

Follow-up to Way Of The Tiger in that you control the same persona, although the graphics and gameplay are completely different. Although visually similar, it draws little from Gauntlet - again, you might want both. Both arcade and brain skills are needed, as you work out which doors to open with the limited supply of keys available.

Certainly not just a martial arts bash - in fact you might find the brain strain a bit too much for you. One player single load.

Don't expect to have to strain your brain too much, but if you want the real thing, this is it.