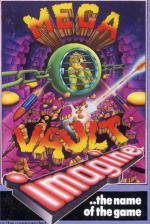 Megavault, from Imagine, is one of those cute little games which show not only just how far 3.5K can be stretched, but also that predicting what makes a winner is virtually impossible.

There's very little to the game, but it's so infuriating you just have to have another go. You're a bobbing head on legs - the graphics are very simple throughout. You're at the left hand end of a tunnel at the top of the screen. To the left there's a wall behind which a monster lurks, to your right the ways to the key. But the way is barred by two four-legged spiders, bouncing between the walls, and not very far apart. Touch one of these and it's curtains. Seems impossible at first, but you soon pick up the knack of getting past them - move down and next to the vertical path of one of them, wait for it to rise, and then dash under both.

Next there's a narrow corridor, down which another purple spider hurtles back and forth. There are four bits of blue food to be taken down this one, but the grub raid has to be timed to perfection - these spiders don't hang about - and if you're not placed correctly there's a hair tearing moment to get into a food larder and safety.

You get four lives per game. Definitely a classic for the unexpanded machines.

You get four lives per game. Definitely a classic for the unexpanded machines.