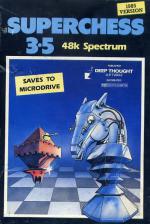 CP Software's new chess program is a vast improvement in power, speed and facilities over its earlier 3.0 version.

The main display is split in two with pertinent data on the left, the board on the right. As well as displaying its move in standard algebraic notation, the program also provides the following information as it searches: its best move found so far; a points evaluation based on material gained or lost and the general position of the pieces (a plus indicates that the program believes itself to be ahead, a minus that it is losing; number of nodes (lines of play) searched; play (moves per side) depth reached; current best line of play, showing its best moves and the expected consequential moves, down to the level of play reached in the search.

In addition, there are clocks for both players, recording both the total elapsed time and the time taken for the current move. The display also shows the total number of moves and the program's time limit.

While this information is all grist to the mill, what a pity the program hasn't provided the option to suppress the best line of play data. This is effectively a hint as to your next move, so whether you want a hint or not, you've got one. All this data tends to make the left side a little cluttered so that when the program displays its selected move, you must search the rest of the stuff for it.

The time limit for the computer's response can be set at anything from 5-999 seconds or you can let it match your own speed. There's an excellent problem-solving mode (mate in up to four moves) which displays all mates, not just the first it finds. Other facilities let you: set up board positions, change the colours of the board and pieces, list the last 62 moves, play black and white (and invert the board) and save the program and current game to Microdrive. It plays to a good standard and is likely to be the best chess program you'll find for the Spectrum.

With its many features and fast play, SuperChess 3.5 is an excellent chess program and can be confidently recommended to all Spectrum owning lovers of the Royal Game.

An excellent chess program... Can be confidently recommended to all Spectrum owning lovers of the Royal Game.