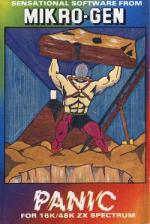 And still they come at you, trying to turn your home into the ultimate arcade. Games good, bad and indifferent - this latest batch of 16K Spectrum cassettes has examples of all three.

To start with the good, Beetlemania is a Pacman style game, written in machine code, in which four beetles chase you round a maze. I found it even more addictive than the original it is based on. For one thing, the graphics are excellent, with the green beetles scuttling round like scorpions, while the man races frantically along with his little legs going at nineteen to the dozen.

The game begins with a brief demonstration showing you how you're to collect the eggs, which are left one at a time by the beetles, and deposit them safely in what is described for some reason as a lock. Eggs and locks appear randomly in the maze, and when four eggs have been safely collected an exit will flash, and you must scurry out of that to the next level.

This is the same maze, but with several of the walls joined up, so giving you a little less breathing space. Succeed here and the same thing happens again, making it very tricky indeed to avoid the beetles in the increasing numbers of blind alleys. Further success takes you back to the original maze, opened up again, but this time with a purple spider racing along the corridors to add to your problems. Beyond that I don't know - as the spider got me every time.

This increasing difficulty is a welcome feature, as is the sensible way the control keys are spread: Q for up, Z for down, I for left and P for right. You have five lives, three skill levels, and while there is a high-score record the game's only fault is that as soon as the last life is lost, it switches instantly back to the opening screen without giving you a chance to check your score. But that apart, congratulations to the game's author, Steve Hughes, for improving on a good original.

What a contrast to Maze Chase, which is a simple (and I do mean simple) variation on the same game. The action is quick enough, being also in machine code, but this isn't so much Pacman as Matchstickman. Control here is by use of the arrow keys, which has never seemed to me the most sensible part of the Spectrum keyboard layout, and the graphics are disappointing after Beetlemania.

There are four mazes in the 16K version, with 12 in the 48K program also on the tape, and your opening options are instructions, demonstration, resetting the high-score to zero, or play. A major complaint is that if you don't press any key within about 30 seconds, which is quite possible if you've left the tape to load, you automatically get a long demonstration game, with all three lives, and no way to break out of it that I could find! Otherwise, you get the usual features of four ghosts, fruit to eat, and increased speed as you go. Not a patch on the original though.

Jawz is the underwater space invaders which most people will know - in fact you'll need to know it as there are no instructions in the program to explain exactly what you're meant to be doing. You are told the control keys and the cassette insert tells you that you're meant to be killing the sharks while avoiding the poison pellets the jellyfish at the top of the sea are dropping down on you.

This isn't a game that ever particularly appealed to me, but Jawz is an adequate if slightly limited adaptation offering you a one or two-player game, a high-score record and three skill levels. Unfortunately the sharks look as frightening as a bowl of goldfish.

The aliens in Micro-Gen's Galakzions are more menacing - or at least the first five rows are. The final row contains what look remarkably like two pairs of flying yellow knickers! The action in this game should be fast enough to appeal to the addicts, though the creatures don't move off the side of the screen and back on again.

In fact the aliens are quite restrained to begin with, the first wave peeling off in ones and twos and firing very few shots at you - but you have to watch the shots they do fire, which spit down the screen with great speed. From the second wave on, though, they come at you in great swirling bunches, and while they don't exhibit the usual nasty tendency to herd you into a corner for the kill, they are nevertheless very nippy movers - especially those knickers. Not a perfect copy, then, but still a satisfying version.

Panic, or Space Panic as it's better known, comes from the same company. It is the familiar aliens and ladders game where you control a little man, or as in this version, a tall thin man, who is being pursued along levels and up ladders by nasty little creatures which he must kill by luring them into holes and then bashing them on the head.

It's just as well they're not an endangered species!

With the wealth of colour available on the Spectrum, it's hard to see why anyone would choose to make the creatures purple against a black background, unless they have a strong sadistic streak. As with Galakzions, if you like the original you probably won't be disappointed with the speed and features of this version. The man turns into an ominous skull and crossbones should he be sent to meet his maker, while if you fail to bash an alien after luring him into a hole he will change colour (or she will, it being difficult to tell with aliens!). It will then take a plunge through two holes to see the alien off.

If you fail again you get another colour change, and will need three holes to despatch him. After that, forget it. A choice of skill levels would have been nice, but you can't have everything I suppose.

Both these Mikro-Gen games will work with Mikro-Gen joysticks, though when I attempted to use my Kempston ones I got some very odd results. Or maybe I've just been killing too many aliens lately, I don't know.