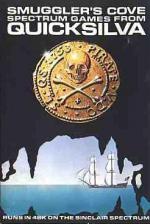 The year is 1753. Two miles off the north Cornish coast, huge waves pound the latest victim of the notorious Doombar, the cutter captained by the ruthless pirate Blackbeard. You are of course well aware of the rumours of the hidden hoard of Blackbeard's treasure, and the terrible tales of those who have tried to find it...

But as well as tracking down the treasure, you have to find your way out of the maze of caves where the hoard lies hidden. And no, you can't get out the way you got in, because you have slipped and fallen twenty feet to the floor of a cave.

Getting started with this game is virtually impossible. You can get as far as finding five or six rooms, but you can't do anything once you have found them, unless you have gone through a complicated and unlikely sequence of actions, and all in the right order.

Without finding the whatshammycallit, as well as the otherthing, you can't climb the wheresit. Unless you climb the wheresit, you won't find the doobrey. Without the doobrey, you can't cross the wheredidyousay to find the somethingorother. But to collect the somethingorother, you will need to have done something outlandish earlier with yetanotherobject in order to avoid being eaten by the whatsit.

The whole game is couched in eighteenth century Cornishspeak. "Argh, Jim lad. There be a barrel here!" it growls at you. And it addresses you as "Scupper" and "Me lovely" as it yell you that it "can't do that".

The graphics are nothing to write home about, but the pictures of the various locations are drawn fairly fast, and they're good enough to give you an idea of where you are.

Reincarnations are random, courtesy of a routine that asks you for your date of birth after you have been eaten/flattened/zapped by magic or whatever. More often than not, the program decided to leave me dead, so do be sure to save the game if you manage to get beyond first base with it!

The first rule of adventure-writing has to be to lead the player on far enough to get him hooked before you start making things difficult for him. Getting anywhere at all with this game is just too hard, and there's only one solution to most of the problems. Sure, Smuggler's Cove will give you hours of happy fun - if you don't mind wandering in circles. Just like life, in fact.

Getting anywhere at all with this game is just too hard, and there's only one solution to most of the problems.