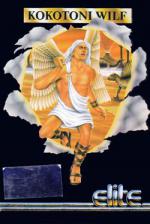 According to the inlay, you're Kokotoni Wilf of the title, sent on a mission to pre-history by Ulrich, a great Magician. Thanks, Ulrich. Your task is to collect fragments of the Dragon Amulet.

The game kicks off with Kokotoni Wilf descending from the skies behind a large head-nodding, tail-wagging yellow dinosaur. A blue meteor fragment oscillates from left to right at the top of the screen and other nasties are scattered around. Wilf is a white UDG.

To gain points Wilf must collect the white stars from each screen. Simple passing over them accomplishes this, but touching anything nasty loses on of his lives. At least when you're reincarnated you don't have to start from scratch - you're dumped back in the current screen, but unless you're quite prepared, this can mean you're dead on arrival.

The second screen has two dinosaurs spitting at each other, but so slowly that avoiding their trails is a doddle. Then on to the third screen, where a diamond awaits beneath a tree. Getting past the pterodactyl isn't too tricky - it moves in a predictable pattern, as does the bird which blocks your way to screen four. Screen four is underground; bats descend and ascend, and don't bang your head on the purple blobs. Down to the fifth floor, more birds, bats, snakes and a sabre tooth tiger.

It's one of those games where at first you think it's quite tricky, but you soon get the knack. I'm afraid I lost interest very quickly.

It's one of those games where at first you think it's quite tricky, but you soon get the knack.