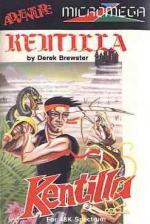 In the footsteps of the great warrior Ashka you trudge round Caraland looking for the evil Grako. Ashka, sadly deceased (and foul play is suspected), is no help at all except that he has left you his sword. Nobody else is much help either; the main feature of the evil Grako's kingdom is frustration.

You have to sort out friend from foe; at the same time you have to navigate through the arid plains and dense forests by means of direction commands that don't always make sense. North and East are treated at one point as opposite directions, and there is more confusion when Ups and Downs come into play. Then there are the objects to be collected, but that's only half the story; finding out what to do with them is another matter.

So far, so familiar. There are 29 commands at your disposal to help you grope around Caraland, and the game includes an editing feature to let you recall and overtype the last command.

None of this is much help when the Urga-Mauls descend on you in strength. These, you'll find, are the worst of the early obstacles; the Cavezats fight only in self-defence but need to be bribed to part with any objects; the Rattling Quarg is a run-of-the-mill adversary; and Ogeron, though friendly, is a man of few words. For example, he tells you that Grako is in the Black Tower but stays silent when asked where it is.

Elva, a creature you'll meet again and again as the UrgaMauls overpower you, appears totally inert until you learn how to get on his right side.

The text is sprinkled with pictures to cover most of the locations.

As the frustration builds, so does the sense of satisfaction in making progress. It seems a perverse way of enjoying yourself.

As the frustration builds, so does the sense of satisfaction in making progress.