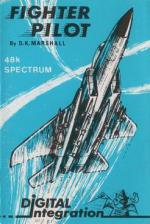 Pile It On Pilot

Digital Integration seems to have circumvented US arms and technology embargoes and imported a McDonnell Douglas F15 Eagle.

Fighter Pilot is a high-performance flight simulator, complete with enemy intruder aircraft to shoot down.

There are several versions you can play, varying from landing practice at trainee level to air-to-air combat at ace level, with or without visibility. The combat settings are obviously the most interesting, partially for bloodthirsty reasons, and partially because they solve the endemic problem of flight simulators, which is finding something to do with yourself once you're off the runway.

So you pile on the power till you're at maximum revs, let off the handbrake, pull back the stick and...crash. Wheels up at more than 300 knots, so you're back on the tarmac. The trouble is, the thing goes up like a lift, and you have the few seconds between 140 knots (take off speed) and 300 knots to get the wheels up.

Having mastered this, you switch to combat mode, which locks your radar on the first intruder, and set an intercept course. That's where your problems really start.

First time out I headed straight at the enemy plane. On full power you'll be doing anything between 900 and 1,400 knots. With the other side doing 550, intercept doesn't take long.

The first sighting - a little blob in the distance - grows fast until it is clearly a large delta wing beast, obviously a Vulcan.

After a few more abortive intercepts it became clear that there wasn't a lot of future in mixing with it. Plan B, which involved climbing to 65,000 ft, then diving past, guns blazing, was also unsuccessful, and left unsightly craters on the ground, with me in them.

Once you've got the first four, you'll be on the verge of running out of fuel, so you'll have to land to rectify this.

This is not easy - the F15 will apparently fly at Mac 2.5 upside down, climb vertically and spin like a top, but it's well nigh impossible to slow it down enough to actually land.

We're not at the fully-functioning dogfight yet, but it's still a pretty effective piece of work. If there are any US airpersons out there reading this, put Chubb locks on your bases, as some of us may have difficulty refraining from slipping inside and trying the real thing...

We're not at the fully-functioning dogfight yet, but it's still a pretty effective piece of work.