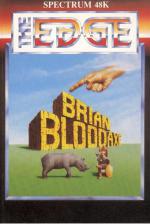 Britain is under attack, not from hordes of aliens from outer space - but from viking Brian Bloodaxe. Although a platform game, it contains enough variations and nuances to tickle the most jaded palate.

For starters, there's the opening tune - Sousa's stirring Liberty Bell (Monty Python theme tune). If you have one, make sure you hook up a Currah Speech box to get the full benefit of the sound.

Brian lopes and leaps, with a horned helmet and axe, the helmet being especially useful for sticking into ceilings and foes alike. There are a daunting 104 screens for Brian to conquer, each with a set of logical puzzles, as well as 300 enemies, weapons and surprises and an abundance of hidden traps.

Each screen supposedly represents a British town - part of the fun is guessing which they're supposed to be. Brian explores towns, collecting and using objects as he goes. Your ultimate mission is to sit Brian on the throne after amassing the Crown Jewels. That done, the game sets another task. Complete it and a prize is on offer - your choice of one of the three objects Brian is carrying at the finale.

For its graphics, humour and huge variety of screens and puzzles, the game deserves a warm welcome. For all its similarly of theme, Brian Bloodaxe looks set to rival Manic Miner and Jet Set Willy.

For all its similarly of theme, Brian Bloodaxe looks set to rival Manic Miner and Jet Set Willy.