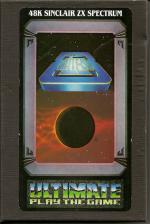 If Knight Lore didn't already exist to prove it, we'd all be raving about Alien 8, and asking if such graphical magic were really possible on a Spectrum. But thousands of people have already bought Knight Lore, so will they spend another ten quid on basically the same game? The answer might not be a lemon, but it could be a resounding first raspberry for Ultimate.

The story exchanges old-fashioned werewolves for a new-fangled robot which you negotiate round the innumerable rooms of the Alien 8 spacecraft. You have a mere 6,000 light years to complete a variety of tasks if you're to save the Alien 8, but your first hurdle is to find the tasks.

The glossy manual tells you that you must locate and activate all cryogenic chambers and ensure all thermolec valves are in the correct sockets. But as you can't initially tell a thermolec valve from a thermal vest all you can do is waddle down the corridors and hope for the best.

As before, you can begin each game in one of several different locations. Each has several doorways which lead to other rooms with a variety of inhabitants, problems, structures and further doorways. Map-makers to the fore, but instead of rooms with ghosts you'll come across rooms with clockwork mice - I've also found a lump of cheese (seemingly not clockwork) but haven't yet got it to the mice to see what effect it has on them.

Control is as before, with keyboard, Kempston, cursor joysticks or Interface II options and with its crumbling blocks, walkways, and one-way leaps, Alien 8 is simply Knight Lore II.

Control is as with Knight Lore... In fact, with its crumbling blocks, walkways, and one-way leaps, Alien 8 is simply Knight Lore II.