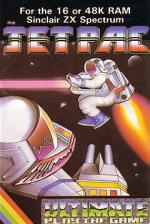 Jet Pac is the first product from a newly formed company which claims it has 'the most experienced arcade video game design team in Britain'.

In a word - greed. You're the chief test pilot for Acme Interstellar Transport and have been asked to go to various planets and assemble rockets. But that seems a mildly boring activity - once you've built one rocket the others are the same.

So when you arrive on the planet and start jetting around, you decide to take a few 'souvenirs' in the form of jewels, elements and gold - which oddly keep falling from the sky.]

The aliens are a mite peeved that you've tried to walk off with their treasure, without so much as paying the V in VAT. So you have to shoot them with your Quad Photon Laser Phasers.

You also have to fuel the rocket you've assembled in order to get off each planet - and that means collecting six fuel pods - which also drop from the skies.

This is one of the only cassette-based games - no, the only - I've ever played whose on-screen graphics match the artists' impressions that look so enticing on cassette sleeves. The documentation is also quite sufficient to explain the principle, so Jet Pac wins on both counts.

The first planet features fireball-type creatures that don't get in your way too much as you build your rocket and then re-fuel to move on to the next planet. The trick is to stay hovering above the planet on the three 'safe areas' above the ground - if you don't the fireballs will get you.

However, the air seems thinner at the top of the screen and the aliens tend to keep away from it. The second planet harbours mean furry creatures, the third vicious bouncing spheres and the fourth some strange-looking little insects.

The insects are a new breed of tough creature that jealously guard both jewels and fuel pods and seems to have a heat-seeking capability that allows them to follow you around. The fifth planet (I didn't get any further than that) features flying saucers which seem even meaner than the insects.

Little to say here, except that I have never had more fun playing a game on the Spectrum.

Jet Pac is a classic which should rank with Space Invaders and Pacman in the computer game annals of fame.

I have never had more fun playing a game on the Spectrum.