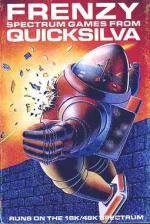 Frenzy may be set in deep space, around the Forts of Falnon in the distant Faluvian Empire, but it bears more than a fleeting resemblance to Berzerk, a fast-action game you may have met much nearer home, at your local arcade.

In Frenzy, as in Berzerk, alien annihilation is the name of the game.

The enemy in Frenzy is a pack of Roboids, rogue killer robots and "three meters of mechanical hell," which lurk in the maze of a wrecked space station.

Only one can play, and your task is to destroy the Roboids by using the keys 6 to 0, which move you left, right, up, down and fire your blaster.

Points are scored when you hit a Roboid, with the running total displayed at the top of the screen, along with the number of lives you have left to you. You have three lives in all, but one is lost each time you run into any of the walls of the maze, or collide with a Roboid or are hit by an exploding pod.

The Roboids, which look like mushrooms with little feet, move around the maze at a sedate pace as you zap them into oblivion. Occasionally the shooting spree is interrupted by an exploding pod which can cost you a life.

I quickly developed a strategy to avoid the exploding pod. By leaving the maze via one of the exits provided you would find yourself in another maze, minus the pod. But the disadvantage of this is that if you have only two Roboids to destroy, the new maze fills up with yet more of the little perishers.

In all there are five levels of play.

The graphics are quite good, but the sound is poor, as well as being low in volume. It is extremely easy to get a high score, as 30 is considered high.

A boring game at first but with perseverance it slowly grew on me.

Overall the game is quite an accurate representation of its arcade counterpart, though minus the sound.

A boring game at first but with perseverance it slowly grew on me.