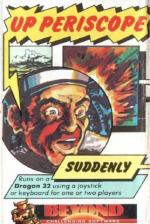 Strategy games are a good way of using a computer's ability to process a range of information simultaneously, and if you add their graphics capabilities you can come up with something like Up Periscope.

One player is in command of the ships, six destroyers trying to guide six convoy ships across the map displayed on the screen, while the second player (or the computer in a one-player game) takes charge of ten submarines which attempt to stop them.

One look at the eight pages of rules and you think you're never going to learn how to play the game. They are in fact very badly organised, but in practice the game proves easy to learn simply by playing it.

The submarines make the first move. Your options on each move are always displayed at the foot of the screen. In addition to moving forwards the submarines also move up or down a level, or fire a torpedo. Only submarines on the surface can be seen by the ships, although one of their options is to use their sonar to detect the presence of a submarine, which might then be dispatched with a depth charge. Control is by cursor keys or joystick.

This is Battleships in 3D. After the subs have moved the destroyers take their turn to move forward, reverse, or turn clockwise or anti-clockwise. The ships are deliberately placed at an angle so that you have to manoeuvre them round the island in the centre of the battle area, which overspills the screen on all sides.

The convoy vessels are then moved, these having no defence but just the ability to move in any of the six directions indicated by the arrows at the foot of the screen.

At the end of each round of moves a status report is displayed.

The graphics on Up Periscope are rather limited, and the fact that it's written in Basic does show in some of the responses. But this doesn't detract from what is, after all, meant to be a slow, tactical game.

Up Periscope may not be the greatest of strategy games, but it's better than average and should appeal to the strategy fans.

Up Periscope may not be the greatest of strategy games, but it's better than average and should appeal to the strategy fans.