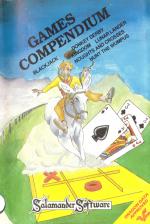 All your old computer game favourites are here. The Salamander Software Games Compendium presents most of the simple computer games for this micro on one cassette.

From the real world there's horse racing, blackjack and noughts and crosses. From computer folk-lore there's Kingdom, Lunar Lander and Hunt the Wumpus.

These are the sort of programs that people learning to program will eventually write for themselves. So the cassette is a handy shortcut to learning some tricks for neat presentation and so on. The games compendium is a handful of fun but there's nothing on it that would be impossible to do yourself.

It's well presented in a library box but the instructions inside are on a shoddy A4 sheet. Only Lunar Lander qualifies for any written documentation - the rest of the page tells you how to run each program.

These are all well-written Basic programs, and several have their moments: you cannot help laughing when a horse keels over in the horse-racing game Donkey Derby. Others call out for better presentation.

Kingdom, in which you rule a country by carefully redistributing your wealth between buying new land and feeding the peasants, has a neat paging facility so that the screen is regularly cleared.

The trouble is, you make all those critical decisions of state just after all the relevant information has disappeared from view!

There's a lamentable lack of originality in the games. They're not that much different from their ten-year-old tele-type-bound predecessors.

Hunt the Wumpus still consists of tracking a sleeping monster round a dangerous network of caves. It's still played with cave numbers and paper rather than the amazing graphics version Texas came up with for the TI99/4 micro. Old Wumpus-hunters will have no trouble bagging a few Wumpi and bold ones will still have a lot to learn.

In Lunar Lander, you have to land a spaceship on the moon. It is the only reworked program as well as being the only one to dare to use the Dragon's high-resolution graphics. It's surprisingly difficult, particularly as it follows the suicidal Noughts and Crosses program.

Lunar Lander is also the only program on the tape needing a joystick - it's a bit naughty of Salamander not to provide a keyboard option as well.

The program offer various levels of play involving winds, gravity and so on, but I found myself getting a bit suspicious of the mathematics involved, especially when I saw my spacecraft bounce off the side of the screen.

The Games Compendium is a good way to see some of the things computers can do and the sorts of games people used to play with them. It's not a bad idea for people who've just unpacked their Dragon. But don't expect its fun value to last long.

It's not a bad idea for people who've just unpacked their Dragon. But don't expect its fun value to last long.