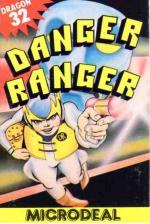 The excellent Danger Ranger shows that Microdeal still have the pick of American software that can be imported and converted from Tandy to Dragon.

Your joystick controls a man, whose aim in life is to first collect keys and then discover the treasure chests to unlock them.

The first screen has five platforms, each with a key at either end, and with one or two holes dropping through to the platform beneath. You start at the top and collect all the keys in order to get through to the second screen where the chests are waiting. The first problem you face is the fact that bats are fluttering round on some of the platforms. You have to shoot these or avoid them.

A worse problem is that moving up and down at each side of the screen are what appear to be tin cans, though don't let appearances fool you as these can shoot to kill. If you hit them first they burst into flames and sink to the floor, but a replacement is never far behind.

On the second screen there are several rows of what look like squashed aliens arranged as stepping stones, and you must run across these while avoiding the lasers that move up and down the screen. At the end of each row you can jump to the one beneath, picking up a treasure chest as you go. But there are also several devil masks which act as obstacles. While you can shoot these, your gun has only a short range and you must brave the lasers to get close enough to do so. Running across the top and bottom rows is the hardest part because the lasers appear above and below you with hardly any warning.

If you get to the end of the second screen, what's your reward? Why, you're back to the first screen again only with more bats and more bullets, which this time are sprayed about so that new tactics are called for. If I'd been able to work out what they were I could tell you what lay beyond that, but I haven't and I can't. You want to discover some of the surprises for yourself, don't you?

Microdeal's The King dominated the 1983 Dragon software charts; is Danger Ranger set to do the same for 1984? It's certainly good enough.

Microdeal's The King dominated the 1983 Dragon software charts; is Danger Ranger set to do the same for 1984? It's certainly good enough.