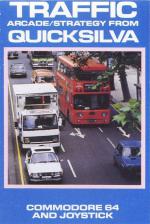 You've just been given the tiresome job of controlling the congestion on the streets of London. By using the traffic lights, you must ensure that long queues of traffic don't build up at junctions. To do this you have to move the white cursor to the desired junction, and change the colour of the traffic lights by pressing fire.

If you manage to impress your superiors by keeping the traffic moving, you will be rewarded by being moved to a more congested area. But if your ability to control the traffic is abysmal, then everything will grind to a halt.

Before you get down to the nitty gritty of the game, a little scenario occurs. To the accompaniment of the chimes of Big Ben followed by a snazzy tune - Big Ben rests to the left of the screen, a blinking policeman appears on the right and then on rolls a bus.

Playing the first screen of this game was a cinch once I got to know how the traffic progresses. but things got a bit more hairy as I went through more screens. Each screen has a different layout of roads and, of course, there are more junctions to tackle.

I got as far as screen nine, and while darting around with the cursor changing lights from green to red, and vice versa - I also had to keep an eye out for build-ups at junctions.

If you don't spot a congestion in time, a number flashes in the congested area to the sound of an alarm-type noise - and if you're not quick enough to change the lights, everything comes to a halt.

The graphics in this package are quite good. Lorries, cars, motorbikes, etc. are depicted by different sized rectangles which move smoothly along the road, to the background sound of strained engines and horns.

This is not a bad arcade/strategy game with a slightly different concept. It should keep you entertained during those late nights.

This is not a bad arcade/strategy game with a slightly different concept.