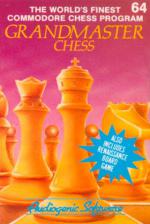 Grand Master is the latest in a long line of chess programs for microcomputers, and this one runs on a Commodore 64, with cassette deck.

You're greatly helped in Grand Master by a very clear display, and a large number of special facilities. Although the game commences with a black board on a white background, screen, border and background colours can be changed throughout the game if required.

There are ten levels of play, with a response time ranging from about five seconds up to hours and even days.

While waiting for a move from the computer, the best move it has thought of so far is displayed on the screen, and if you wish, simply pressing RUN/STOP will make it take that move.

While Grand Master is playing from its large repertoire of opening moves, and before entering the middle game, you can ask for a hint on what it thinks your best move is. Thus it can be an instructive opponent.

All moves are timed throughout play and the clocks resent to zero after every game. You have the option of playing either black or white but cannot swap during a game.

Grand Master does appear to be better at defending that at attacking, as is the case with many chess programs. Throughout the middle game it pulls its punches and doesn't go in for the kill.

In the end game, though, the program is a very effective opponent indeed. It goes straight for the jugular.

Finally, it sticks to the rules of chess allowing castling, capturing en passant and promotion. But it suffers one fault: when promoting a pawn you automatically get a queen, whilst it chooses the piece it wants.

That one error apart this is a superior chess game and provides worthy opposition for players up to quite a high standard. The display is good, it is extremely versatile and cannot really be faulted.

A superior chess game and provides worthy opposition for players up to quite a high standard.