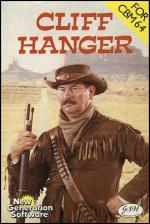 Cliff Hanger is so similar to the style of the Roadrunner cartoons that I wonder if it wasn't originally written with these in mind. Discretion being the better part of copyright problems, the characters here are two cowboys. Cliff Hanger is the hero (you may know his brother, Coat, and cousin, Aircraft).

There are 50 screens in all, each introduced by a clapperboard sequence which tells you which level you're on, which screen you're on and which 'take' it is for that screen - in other words, how many times you've goofed up so far and still not got it right.

Each screen has a slightly different desert setting, with rocks and cacti scattered about, you standing on one of the foreground rocks and a long road winding into the distance. Along this road runs Mr. Bad Guy, and you have to play the cunning coyote trying to stop the roadrunner using a series of ingenious devices.

The Faraday screen, for example, has you on a cliff on one side of the road with a giant magnet, while on the other side is an anvil. When you pick up the magnet it attracts the anvil to the middle of the road, where it plummets, hopefully just as the baddie is passing beneath.

Other screens include Getting Your Own Back, where you throw a boomerang, and various others involving trampolining, bomb-throwing and boulder-dropping.

Only falling off a cliff loses you a life, though in the 30 screens of the second level you have to be much more careful and get out of the way of the devices, which have a habit of backfiring on you.

The graphics aren't up to cartoon standard, but they're amusingly done.

The graphics aren't up to cartoon standard, but they're amusingly done.