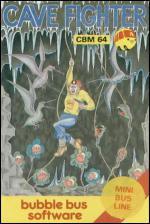 Cave Fighter is one of those curios that pop up from time to time and proves there's still life in an old theme.

You control a rather too small caveman - no, not of the Ugh! variety, more of a potholer. Control is joystick only but allows you to climb, shoot, walk and jump to different heights. The latter is rather necessary, since to move around the network of underground caves you'll have to use the dangling ropes and jump from these to platforms.

To jump you just hold the fire button down until the power meter indicates the required strength, then release and it's up into the air. You can move the intrepid explorer in mid-flight - just as well because sometimes ropes dangle right above hazards.

The aim of the game is simply to get through as many of the caves as possible in the time allowed. And of course to knock up as many points as possible.

There's plenty of action here, from the simple green caterpillars, despatched without a moment's thought, to the purple pterodactyls which can be shot while you're in mid-bounce - a tricky manoeuvre.

Then there are the spitting flowers. There are a bit nasty as they can appear just off screen. Then when you move you suddenly see them, and the deadly poison coming at you, and it's odds on there's no way you're got time for a quick leap onto a ladder or platform.

There are many other hazards; 16 beats of one form or another and 31 caverns to explore. Bubble Bus has thoughtfully allowed you to alter your number of lives (from 1 to 99) before you start, as well as the starting level (1-31). The different levels look much the same, apart from a change of colours and the different types of sprite, but the screen layouts get more and more tricky.

The graphics and sprites are quite well done and the action's nice and smooth. Thankfully, there's no background music as such, more a series of musical effects like whistles. All in all, a good buy.

A good buy... There's no background music as such, more a series of musical effects like whistles.