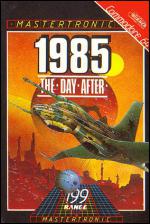 Despite the strangely irrelevant title, this game turns out to be nothing more than a very competent variant of the classic Lunar Lander format that we know so well.

The dotty scenario tells you that it is the day after Big Brother has been destroyed (hence the title) and the Earth must survive on its own. You have been assigned to fly a small spacecraft to collect much-needed energy (nuclear plasma pods) from four neighbouring planets.

Your transport turns out to be one of those old lunar landing craft - you know, one of those where you can rotate clockwise and anticlockwise, and can fire thruster rockets.

You begin by piloting your ship out its space station, no mean feat in itself. Once free from Earth, you can move your ship to any of the four planets that sit obligingly in a row near the top of the screen. Mind out for the flying saucer.

A different screen pops up for each of the planets entered. Each planet has a set of obstacles, missiles and tunnels around which you must manoeuvre your craft, setting down gently and precisely on a nuclear pod. Should you succeed at each planet, you then get the dubious reward of entering a twisting cavern where you must collect a fusion core.

The game has simple but effective and colourful graphics, a good selection of appropriate sounds, and a fairly testing challenge. At such a low price, this entertaining little program is a bargain.

The game has simple but effective and colourful graphics, a good selection of appropriate sounds, and a fairly testing challenge.