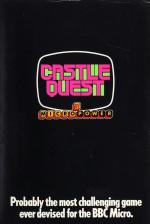 If it weren't for Elite, Castle Quest would be the best game for the BBC. As it is, it's the best arcade game - but it's also an excellent adventure. Programmer Tony Sothcott has managed to blend the crucial elements of both to come up with something really special.

The scenario is a wizard's castle and your task is to find his treasure. In your travels you'll come across trolls, fire-imps, the wicked witch and giant spiders. If you range far enough afield, you'll also come across a ruby, a bucket, an aqualung and other items which you'll need.

The action takes place on a colourful platforms and ladders framework, but even here there are clever bits - long passages with windows, behind which you can see the hero as he moves along. And the ladders are wide enough so you don't have to fiddle about before climbing.

As with adventures you can pick up objects you pass over, and store them in your backpack. They're then shown at the top of the screen so you can retrieve them when necessary. Pressing "I" once provides information about what you're carrying (usually pretty obvious), the second press shows your score and the third resumes the game. Your score picks up the more you explore and of course there are bonus points for finishing.

But it's the action and the problems that will keep you coming back to Castle Quest time and time again. Without giving too much away I can reveal that if you get thrown in jail (which you almost certainly will), you have to make the guard come in to get out.

There is a way to get the torch on the wall, which you'll need, and don't forget to pick up the stool on your way out, which you have to time rather carefully because of the other guard.

But escaping from prison is one of the easier tasks. Passing the spider (which you have to do to get the sword) requires acute observation and lateral thinking. You'll need more than one torch as well. By the way, there's more than one killer arachnid at large.

The graphics are very good, but the sound's a bit limited. All you get is a tinkling noise as the hero walks or jumps about, with various whistles and other sounds as things happen. Mind you, I suspect there isn't a spare byte of the Beeb's RAM left, and we should be grateful for any sound at all.

The left-right scrolling is very smooth indeed and there are commands to move the hero to the left or right of the screen. This is necessary sometimes because you need to see where you're going in order to time dashes or leaps for freedom. However, the vertical scrolling is a bit jumpy at the top.

All in all, this is one of the most enjoyable games I've played for a long time. The action's good enough to satisfy the hardened arcade freak, and the problems will keep many a keen adventurer guessing for hours.

If you have a BBC, buy Castle Quest tomorrow. If you haven't join me in writing to Micro Power demanding a 64, or Spectrum, version.

Other BBC Model B Game Reviews By Bryan Skinner

The action's good enough to satisfy the hardened arcade freak, and the problems will keep many a keen adventurer guessing for hours.