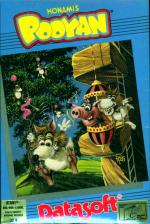 Are you sitting comfortably? Then I'll begin. Once upon a time, there were three little piggies and a big, bad wolf. That was once upon a time. In this updated version, Wolfie has sensibly recruited a gang of lupine roughs to help with the dirty deed.

The piglets and wolves confront each other across a chasm too wide to jump. The wolves put Plan X into operation and float down the cliff-face clinging to helium-filled balloons. A quick dash across the valley, a swift shin up the pigs' cliff-ladder then presto - it's bacon sandwich time. The intended lunch has an even dafter idea where one pig sits in a basket which is tied to a rope while the others raise and lower it. Equipped with a bow and arrow, Piggy can now play Robin Hood, thus thwarting the wolves who go crashing to the ground when their balloons are hit.

This calls for plan Y. The wolves start hurling acorns (which look like rocks) as they drift downward. If an acorn hits Piggy square on the snout, Piggy tumbles earthwards headfirst. If the piglets manage to survive the first attack by 32 wolves, they face Plan Z. The wolves are now grounded, so they use their balloons to float upwards. Some of these balloons have double skins - no fools, these wolves. Any wolf reaching the top helps to push a large boulder towards the edge of the cliff. When seven wolves arrive, the boulder falls. Large rock plus pig in basket = spam.

The game is simple to play but requires co-ordination and coolness under pressure. Loosing off wildly with your arrows is not recommended but may achieve some result, e.g. striking a wolf's shield causes the arrow to deflect downwards and, if you're lucky or deliberate enough, pop the balloons of any wolves below. It's best to shoot calmly at each of the helium spheres, taking care all the while to dodge the barrage of acorns. The wolves are just like those in comics - long snouted and spindly-legged, with comically mischievous expressions.

Completing screen two takes you back to the start but naturally everything gets faster and harder.

Excellent graphics, especially the wolves, and a refreshingly different game. First rate entertainment for you, and a happy ending - for the wolves. The Pooyan should have stuck to their house of bricks.

Excellent graphics, especially the wolves, and a refreshingly different game.