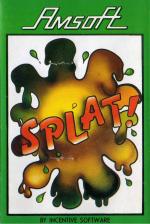 You have three chances to avoid being plastered against the wall in this game. You must guide Zippy round a massive exploration area which slides about unpredictably.

The aim of the game is to get Zippy through eight levels, avoiding numerous obstacles put in his path. To get through the levels Zippy must eat as much grass and plums as possible while dodging painful drawing pins and pools of water.

After the preliminary title screens the option screen flips up. You can change the background and foreground colours by pressing DEL - there's a choice of six colours.

You can select keyboard or joystick; I opted for the former. You can use the cursor keys on the Amstrad of define your own keys. Completing each level wins you a bonus point. So, with three lives to play around with I set Zippy on his rampage to complete his mission.

Performance on my first attempt was pretty abysmal. As well as good coordination with the keys, you need to keep your eyes glued to the screen to see which way it's scrolling.

Zippy scampers around in a butterfly stroke fashion, sounding like some sort of fly eating blades of grass. At the same time the screen scrolls up, down, left and right in a bid to squash him.

At the bottom of the screen you can see the number of lives left, your score, and how far on that particular level you've reached - which tends to act more as a reminder of how poorly you're doing.

The graphics, colours and scrolling movement are pretty well done. It is annoying, though, that every time you lose three lives you must go through the boring options etc before you can get stuck into another game.

I managed to reach level 2 with a score of 535 - but if this is a taste of what's in store for you on the other size levels, you'll certainly get some hectic fun out of this game.

The graphics, colours and scrolling movement are pretty well done.