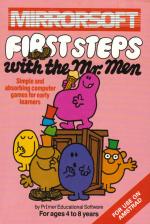 The pack contains three games (they actually claim four on the pack, but the fourth is a just a derivation of the third game) featuring the popular Mr Greedy, Mr Silly and Mr Forgetful characters of Roger Hargreaves. The games are written for children in the age range 4-8. The games are simple, but bright, colourful and appeal to children. Also with the pack comes a set of stickers showing Mr Clever, which can be put on the cursor and copy key cluster which is used to control the Mr. Men during the games.

The first game is Mr. Greedy's ice-cream hunt. In one of the corners of the screen is an ice-cream, Mr. Greedy must be directed to the ice-cream using the cursor keys. This is easy the first time round as there are no obstacles, but in subsequent attempts, walls are added to the screen which Mr. Greedy must be manoevered around. After four ice-creams the game starts again from scratch. This is a pity as I think most children could sucessfully attempt a few more levels of difficulty.

The second game is Mr. Silly's hat game. Mr. Silly is in a hat shop. On the shelves are hats of various shapes and colours: A speech bubble coming from Mr Silly's mouth shows the shape and colour of the hat he wants to try on next. A pointer can be moved by use of the cursor up and cursor right key, when the pointer is under the required hat. Pressing the [COPY] key will remove the hat from the shelf and place it on Mr. Silly's head.

The third game is on the second side of the cassette and is Mr Forgetful's Wardrobe game. There are two rows of six wardrobes. Each wardrobe contains an items of clothing - a sock, mitten, ice-skate etc - and in one of the wardrobes, on the opposite side of the room, is the matching pair. Move Mr. Forgetful to one of the wardrobes and open the doors to reveal the contents, then move him to the opposite side of the room and open one of those wardrobes. If both the items match, the doors remain open and Mr Happy appears, if they don't, the doors close again but remember which item is in each wardrobe as this will help you solve the puzzle quicker. When you have located all six pairs the game is finished. As a derivative of this game you can elect to have letters instead of clothes appearing in the wardrobes.

The games are simple, but bright, colourful and appeal to children.